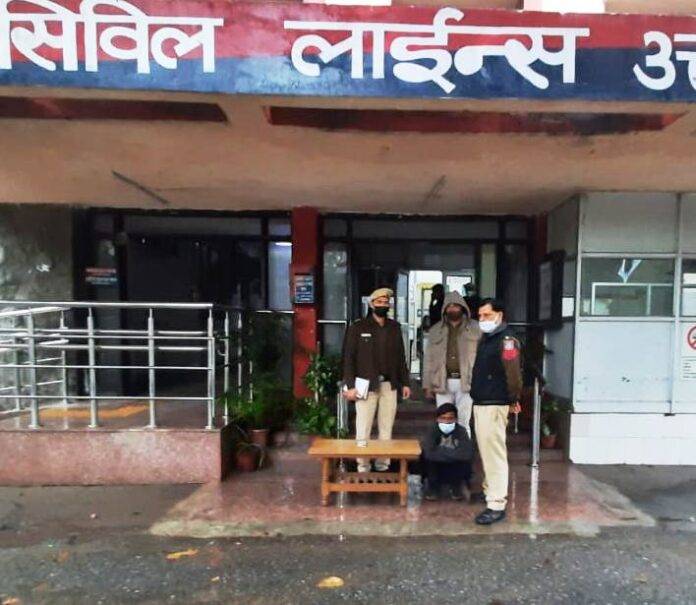 Delhi: Ps civil lines team nabbed four robbers by laying a trap for two days. Four vagabonds robbed a person by choking his neck from behind, One of the robbers was nabbed by picket staff with the help of the public.

Later, the other three vagabond robbers were nabbed by laying a trap for two days in front of a temple by the ps civil lines team. Robbed mobile and whole money recovered. One of the robbers has a criminal history.

Keeping in view, the regular directions of senior officers regarding checking the menace of criminals and to curb street crime, police presence has been increased in the beat area of PS Civil Lines by regular area patrolling and conducting random picket checking during odd hours to surprise the criminals. PS Civil Lines staff has also been directed for maximum use of ROKO-TOKO strategy of Delhi Police

On 07.01.2022, at about 02:30 PM, when the complainant Shri Shashi Kant r/o Punjabi Basti, Malka Ganj, Delhi, age-21 years, (who does the private job), was passing from the exit gate of parking at St. Stephens Hospital, opposite Boulevard Road, Delhi, suddenly, four persons came from behind and robbed of his mobile phone and Rs 500/- by chocking his neck from behind. When the robbers tried to escape from the spot, the complainant raised an alarm and tried to chase them.

HC Hukam of PS Civil Lines was performing Picket duty at Boulevard Road at some distance. He heard the noise of the victim and immediately joined the chase by observing the situation. Ultimately after a chase of some distance, one of the robbers was overpowered with the help of the public, however, the remaining 03 accused persons managed to escape from the spot.

During personal search of the apprehended robbers, the robbed mobile phone make Oppo white colour was recovered. The accused was identified as Abhimannu Kumar, age-28 years. Accordingly, a case vide FIR No. 06/22, dated 07.01.2022, u/s 392/411/34 IPC was registered at PS Civil Lines and investigation was taken up.

The apprehended accused Abhimannu Kumar disclosed that the names of his associates as 1) Tejpal @ Vijay 2). Naresh Kumar and 3). Pratap Singh, all vagabonds. The challenge before the team was to search & apprehend the accused persons, who didn’t stay at any particular place/house.

During the course of investigation, 02 days PC remand of the accused person Abhimannu Kumar was obtained from the concerned Hon’ble court. At the instance of arrested accused, several raids were conducted by the dedicated police team at the hideouts of his associates like Khanna Market, Burf Khana Chowk, nearby Parks, Pul Mithai but didn’t get any success.

The police team also sought the help of local residents and secret informers. Technical investigation was done by checking and analysing the CCTV cameras installed at the vicinity of the place of occurrence and possible routes followed by the culprits. The nearby hawkers, street vendors etc were also interrogated thoroughly but no fruitful result came out.

Ultimately, on 09.01.2022 at the instance of accused Abhimannu Kumar, his three associates/co-accused persons were arrested and robbed amount Rs 500/- was recovered from their possession. The associates were identified as 1). Tejpal @ Vijay, age-30 years, 2). Naresh Kumar, age-30 years and 3). Pratap Singh, age-23 years.

The accused Tejpal @ Vijay previously found involved in 02 criminal cases of Theft and Attempt to Theft registered at PS Bhalaswa Dairy and Kotwali. Accused Pratap and Abhimannu confessed about being remained in judicial custody in Ghaziabad Jail during the year, 2014, however the facts are being verified

125 new cases of Covid in Delhi