A ctor Rhea Chakraborty posted messages on Twitter and Instagram asking for the aid of Home Minister Amit Shah in launching a CBI probe into the death of actor Sushant Singh Rajput. The actor died by suicide on June 14, at the age of 34. In the messages, Rhea identified herself as Sushant’s girlfriend.

Few days ago she wrote on her instagram post “Respected @AmitShah sir, I’m Sushants Singh Rajput’s girlfriend Rhea Chakraborty, it is now over a month since his sudden demise. I have complete faith in the government , however in the interest of justice , I request you with folded hands to initiate a CBI enquiry into this matter. I only want to understand what pressures prompted Sushant to take this step. Yours sincerely, Rhea Chakraborty.”

The actor has been the target of much harrassment on social media over the last few days after posting her tribute to Sushant. In an earlier instagram post, the 28 year old actor had shared a screenshot of a hate message she received on insta. Rhea chakraborty said she had been subjected to online hate with users blaming her for his death.
Rhea posted the image on Instagram, a day after breaking her silence on Sushant’s death. “I was called a gold digger ..I kept quiet. I was called a murderer ….I kept quiet. I was slut shamed ….I kept quiet. But how does my silence give you the right to tell me that you will get me raped and murdered if i dont commit suicide. “No one should be subjected to this kind of toxicity and harassment. I request @cyber_crime_helpline @cybercrimeindia to please take necessary action .ENOUGH IS ENOUGH ” she added.

Rhea chakraborty tagged the cyber cell and requested the authorities to look into the threats.
In the wake of the actor’s suicide, a massive online campaign fuelled by conspiracy theories has been demanding a CBI investigation into the matter. Several notable Bollywood personalities, accused in the court of public opinion for allegedly ostracising Sushant, have also been targeted. 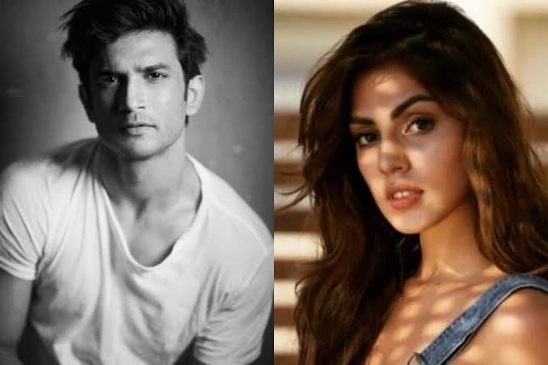 Rhea Chakraborty and Sushant Singh Rajput were in a relationship. Sushant singh rajput, a rising star of hindi film was founder dead at his apartment in Mumbai’s Bandra on june 14. The 34 year old actor died by suicide, police said.

Chakraborty began her career working as a VJ on MTV India. In 2013, she made her Bollywood acting debut with the film Mere Dad Ki Maruti. Rhea Chakraborty was born into a Bengali family in Bangalore, Karnataka, India. Her father was an Indian Army officer.  She did her schooling from Army Public School Ambala Cantt.

MUMBAI | Bollywood actress Sunny Leone told fans about her mood through her new social media post. The actress shared a picture on her Instagram, in which...
Read more
Entertainment

MUMBAI| Bollywood superstar Amitabh Bachchan shared a throwback photo of his film, the actor revealed that it is a film that has not been made...
Read more
Entertainment

MS Dhoni's biopic titled MS Dhoni: The Untold Story featuring Sushant Singh Rajput in the lead that is the favorite of his fans. The...
Read more

To prevent COVID every necessary step must be taken, the government will help the hospitals in every possible way: CM Kejriwal

New Delhi: CM Shri Arvind Kejriwal held a review meeting on the situation of Corona in Delhi on Wednesday and directed the hospitals and authorities...
Read more

Court orders to make Turkey famous museum a mosque. In 1930 when Kamal Ata Turk took power he converted mosque into a this museum....
Read more