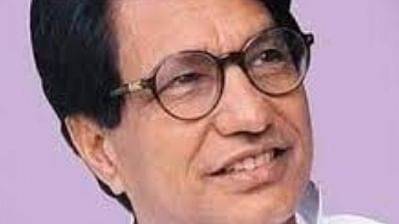 Lucknow| National President of Rashtriya Lok Dal (RLD) Chaudhary Ajit Singh has died on Thursday. He was undergoing treatment after being infected with the coronavirus. His death was informed by his son Jayant Chaudhary through a tweet. He wrote that Ajit was found to be corona infected on 20 April. He died at 6 am today. He wrote that it is a time of sorrow. Till the last time, Chaudhary Sahib was seen struggling.

He further wrote that Chaudhary Sahib got the support of many people while walking on the path of life. This relationship was always dear to Chaudhary Saheb. Mr. Chaudhary considered you all as his family. Today, during this time of grief and pestilence, we request you to take full care of yourself. If possible, stay at home and take precautions. This will help doctors and health workers serving the country. This will be your true tribute to Chaudhary Saheb. We express our heartfelt condolences to all the families battling this epidemic.

It is to be known that Chaudhary Ajit Singh, a strong leader of western Uttar Pradesh, was infected with the Coronavirus for the past several days. Former Prime Minister Late Chaudhary Charan Singh was a former MP from Baghpat. This time in the Panchayat elections, his party, along with the Samajwadi Party, performed brilliantly in western Uttar Pradesh.

Jayant Chaudhary, son of Chaudhary Ajit Singh, who was a cabinet minister in the Manmohan Singh government, has also been an MP from Mathura. Chaudhary Ajit Singh was infected with the Coronavirus for the past several days. Rashtriya Lok Dal chief Chaudhary Ajit Singh’s health deteriorated more on Tuesday night. He was corona infected on 22 April and undergoing treatment at a private hospital in Gurugram. Gradually the infection in his lungs went on increasing. On Tuesday (May 4), when his health worsened, he was admitted to Medanta Hospital in Gurugram. He was on ventilator support for the last two days. He breathed his last on Thursday morning.

Shimla/Jaipur| At least nine tourists, including four tourists from Rajasthan, were killed and three others were seriously injured in a landslide in Himachal Pradesh's Kinnaur...
Read more
Corona

New Delhi| With only 66 new Covid cases and two deaths on Sunday, Delhi is set to open up completely from Monday. While theaters and multiplexes...
Read more
Top Stories