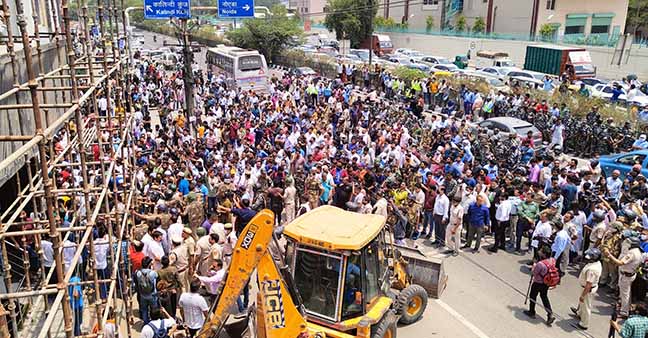 New Delhi| The Shaheen Bagh area of ​​the city on Monday witnessed yet another high-voltage demolition drama, nearly 20 days after a similar operation was carried out in the communal violence-hit Jahangirpuri area in the national capital.

It was officially revealed on May 4 that the South Delhi Municipal Corporation has planned a major drive against illegal encroachment in the South Delhi area and illegal structures at Shaheen Bagh will be demolished on May 9.

The day began with the presence of several media persons at Shaheen Bagh. However, this time, unlike Jahangirpuri, there was less police presence before the demolition drive. The locals were worried about what was about to happen.

Slowly the corporation officials started reaching the place where the proposed demolition was to take place. A JCB bulldozer and around two to three trucks also reached the spot to lift the debris that had accumulated after the demolition. But just as the campaign was about to begin at around 11.30, local leaders including activists from political parties started opposing the proposed demolition of the Municipal Corporation. The protesters stood on top of a portion of a JCB bulldozer. Along with paramilitary forces, Delhi Police personnel also reached the spot in large numbers and the protesters sitting in front of JCB bulldozers were removed. Women agitators were removed by women security personnel.

The police also detained several people, including political party workers, who were not allowing municipal employees to carry out the demolition drive. As the agitation was pacified, the JCB proceeded to demolish illegal encroachments, an iron structure in front of a building. Meanwhile, Aam Aadmi Party MLA Amanatullah Khan reached the spot and was seen talking to the officials. Illegal encroachment i.e. an iron structure or shuttering or formwork in front of the building was then removed manually by the people, with even a JCB bulldozer standing nearby. This iron structure fell on the road and that encroachment was removed.

Local people say that the iron structure in front of the building was not illegal encroachment but a shuttering. A local citizen told IANS that it was put up for the renovation of the building.

Talking to media persons, Khan expressed strong displeasure against the SDMC over the demolition drive. The AAP MLA said that he himself inspected the entire area and spoke to every officer, including the traffic police. “I myself had removed the illegally constructed toilet outside a mosque with my JCB. This is just revenge politics. Just tell me where is the encroachment. Tell me, I’ll remove it myself. I am local MLA.

Even residents told IANS that only a few days ago people had removed all illegal structures in the area. The JCB bulldozer left the Shaheen Bagh area at around 1.15 pm and the demolition operation ended there.

Meanwhile, Delhi BJP President Adesh Gupta has strongly reacted to the development and demanded legal action against those who have become a hindrance before the SDMC in discharging its duties.

Facebook
Twitter
Pinterest
WhatsApp
Previous articleSonia Gandhi gave the mantra of solidarity, determination, and commitment to strengthening the organization in CWC
Next articleA Punjabi film with a unique concept and different story, Saunkan Saunkne is going to be released on 13th May 2022.
Team Janmat Samachar

Urvashi is ready to try new things on screen