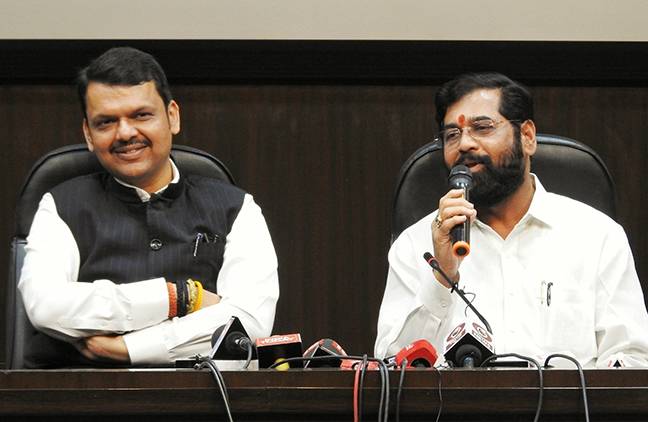 New Delhi | Maharashtra Chief Minister Eknath Shinde on Saturday said his first visit to the national capital along with Deputy Chief Minister Devendra Fadnavis after forming the government in Maharashtra has no political agenda. He said that after Ashadhi Ekadashi falling on Sunday, allotment of departments would be done in the state.

The largest gathering of devotees from all over Maharashtra takes place at Pandharpur in Satara district after walking for almost a month on Ashadhi Ekadashi. The main puja is led every year by the chief minister and his wife.

Asked whether the government (remaining term of the assembly) would last for two-and-a-half years, Shinde claimed, “We will not only last for the remaining term but will also win the next election with 200 MLAs.”

Shinde refused to comment on the issue of Shiv Sena moving the Supreme Court challenging government formation and election of the president and said, “The matter is sub-judice. I don’t want to talk about it. After all, in a democracy, that is. What matters is the numbers and the majority. We are 164 and that’s why we are in the majority. We have a constitution, a law and rules. No one can go out of that frame. We have formed the government according to the rules, Nothing is illegal and we have full faith in the judiciary.”

Shinde said, “Government receiving aid from the Center progresses rapidly. Therefore, we are making a courtesy call on the development of our state.”

“When we took an oath, the Prime Minister had promised that he would always stand by us while working for the progress of Maharashtra,” he said.

He credited Fadnavis for starting several major projects in the state – such as the Samridhi Mahamarg (a project connecting Mumbai to Nagpur and an expressway leading to the eastern parts of the state), the Jal Yukt Shivra (Jal Yukta Shivar) launched in the interest of farmers. rainwater harvesting scheme). Speaking on this, CM Shinde said, “We will go ahead with the projects which were put on hold in the recent past.”

Fadnavis tried to rubbish the comments about his big heart (by agreeing to be the deputy chief minister) and said that it is his party, which made him big and hence he has a big heart. “Besides, I have been a Chief Minister, so I say, Chief Minister is the leader, Shindeji is our leader and we will all run a successful government,” he said.

Shinde immediately said that the people always had a perception that the BJP was always behind power, but “this party has shown that it is at odds with the ideology of Hindutva as propagated by (Shiv Sena founder) Balasaheb Thackeray.”

Both Shinde and Fadnavis said their alliance was natural and they had not done anything wrong.

Weekend curfew lifted from 13 districts in Jammu and Kashmir

Polling stations in Delhi to be converted into vaccination centers: Kejriwal