Home Crime A gang of burglars busted with the arrest & apprehension of 06...
CrimeNationalDelhi 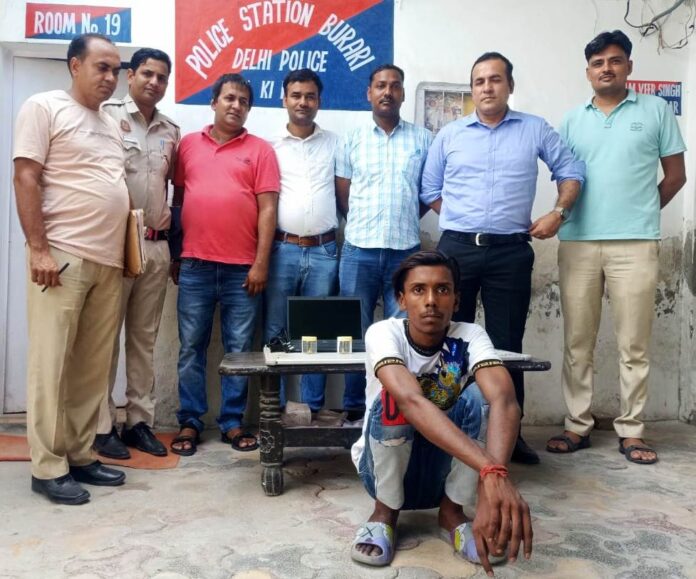 New Delhi : On 28.06.2022, the complainant Shri Gyan Singh r/o Uttranchal Enclave Burari, Delhi, aged-42 years, (who works in a private wine shop), approached PS Burari and reported in his complaint that on 24.06.2022 during evening, after locking his house, he along with his family members went to attend family function at his native place i.e. District Mainpuri, Uttar Pradesh. Today (i.e. on 28.06.2022) at about 05:30 AM, while he came back, he noticed that the lock at main gate of his house and entrance lock at backside room were broken. On checking, the jewellery and cash worth Rs. 12 Lakh was found stolen from the almirah.

The police team examined the complainant in detail about the incident and conducted technical investigation. The CCTV cameras installed in the vicinity of place of incident and possible routes followed by the culprits were checked and analysed. During technical investigation, they noticed one person moving in odd hours. On finding him in odd timings suspicion was raised, he was intensely chased through CCTV footage and local intelligence also helped to identify him. After utilizing this important clue, the team busted gang of burglars from Gali No. 3, Near Shamshan Ghat Mukundpur, Delhi on 08.07.2022. The kingpin of the gang was a girl of 20 years who usually kept the juveniles under her control. She provides resources, accommodation as well as financial help to the juveniles & in return, she gets the major share of booty.

The accused persons were identified as Ankit @ Lambu, aged-19 years and a lady Saloni @ Sita, aged-20 years were arrested and 04 CCLs (Names & details not disclosed) were apprehended. At their instance the stolen articles i.e. 02 Gold Chains, 02 pairs of Gold Ear Rings (Tops), One pair Ear Rings (Kundal), 02 Rings (Anguthi), One Gold Om locket, One pair Ear Rings and 04 Mobile phones have been recovered from their possession.

During course of enquiry, the accused persons disclosed that they have committed the burglary in the house of complainant in the intervening night of 27/28.06.2022. Further, they revealed that they had hidden the stolen cash Rs. 2,30,000/- by digging a pit in an empty plot in Mukundpur area, but the same has been taken away by some unknown persons.

During sustained interrogation, the accused persons disclosed their active involvement in various similar offences. Later, at the instance of accused  Ankit @ Lambu and two CCLs, One laptop and 02 gold rings were recovered from them which belong to case e-FIR No. 627/22 dated 05.07.2022 u/s 457/380/411/34 IPC, PS Burari got registered on the complaint of Shri Saurabh Pal, r/o C-Block Kamal Vihar, Burari, Delhi.

The accused persons moved in late hours in the search of locked houses. They easily broke locks and specially focus on valuable items i.e. Cash, Jewellery, Mobile Phones and Laptop etc. After completion of task, distribution of stolen money was conducted by co-accused Saloni @ Sita who also kept her share. She provides shelter to all Juveniles and arranges legal assistance in case they are apprehended.

She is a desperate and inveterate hand at evading arrest. When confronted she hurts herself and tears her clothes to ambush the legal process. This plot details the process of recovery as she is to be taken for medical care. The interrogation also revealed that she may even attack and injure police and public.

Further investigation of the case is in progress and efforts are being made to affect more recoveries.

Tamil Nadu: Construction Workers Welfare Board raised the cost of vaccination of workers