Home National 78.36 percent polling in the fifth phase till 5 pm amid sporadic...
NationalPolitics

78.36 percent polling in the fifth phase till 5 pm amid sporadic incidents in Bengal 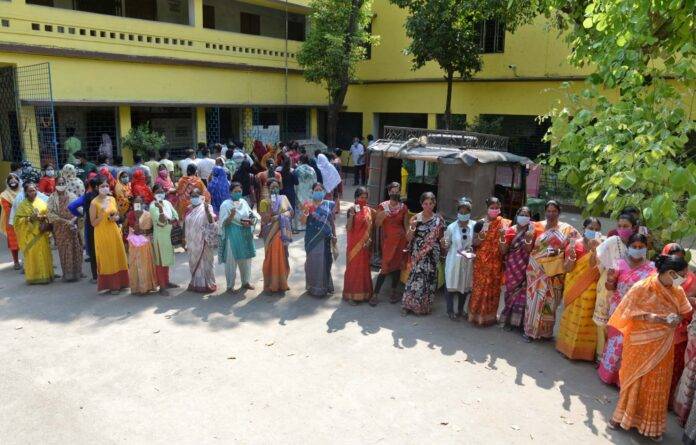 Kolkata| Heavy voting was recorded in West Bengal on Saturday amid some sporadic incidents during the fifth phase of the assembly. The final figures are yet to come, but the data recorded by the Election Commission has shown that till 5 pm, 78.36 percent polling has been recorded in the state. According to the data released by the commission, Jalpaiguri recorded the highest turnout of 81.73 percent, followed by 81.72 percent in East Burdwan. Nadia saw 81.57 percent polling, while North 24 Parganas and Darjeeling had 74.83 and 74.32 percent polling respectively. Kalimpong recorded the lowest turnout of 69.56 percent.

A total of 319 candidates from various political parties were in the fray for the fifth phase, including 45 constituencies including 7 in Jalpaiguri, 5 in Darjeeling, 1 in Kalimpong, 8 in Nadia, 16 in North 24 Parganas and 8 in East Burdwan.

Although polling across the state was peaceful overall, there were some sporadic incidents, including the arrest of an independent candidate from Chakdah AC for carrying weapons in Nadia district.

CEO Ariz Aftab told the media after the election that a candidate named Kaushik Bhowmik was found walking around a polling station in Baliyadanga, Dashpada area and a desi pistol was found in his trousers. When the local forces questioned him amidst the noise of the locals screaming and shouting, his pistol fell out and fell down.

A BJP agent Abhijeet Samant died after falling ill at a polling station in Kamarhati in the North 24 Parganas district. He was rushed to a local hospital, where he was declared brought dead.

Three people have been arrested in another incident. He was arrested for assaulting a man identified as Haran Gaur near the Shantipur police station area in Nadia district. Haran suffered a leg injury, after which he was rushed to a hospital.

In another case, supporters of the Trinamool Congress (TMC) and the Bharatiya Janata Party (BJP) clashed at Shanti Nagar in Bidhannagar in North 24 Parganas district. Supporters of both sides attacked each other with stones. Subsequently, a heavy police force along with central forces reached the spot and the situation was brought under control.

The Chief Electoral Officer (CEO) recounted an incident in which a TMC booth agent in Galasi in East Burdwan district was allegedly beaten up by BJP supporters as he tried to stop them from proxy voting at a polling station in Jahanpur was.

The CEO also said that the Commission has received 2,241 complaints through various platforms today (Saturday) and 123 people have been arrested, including 100 preventive arrests.

Reality 7 5G will launch on 19 November