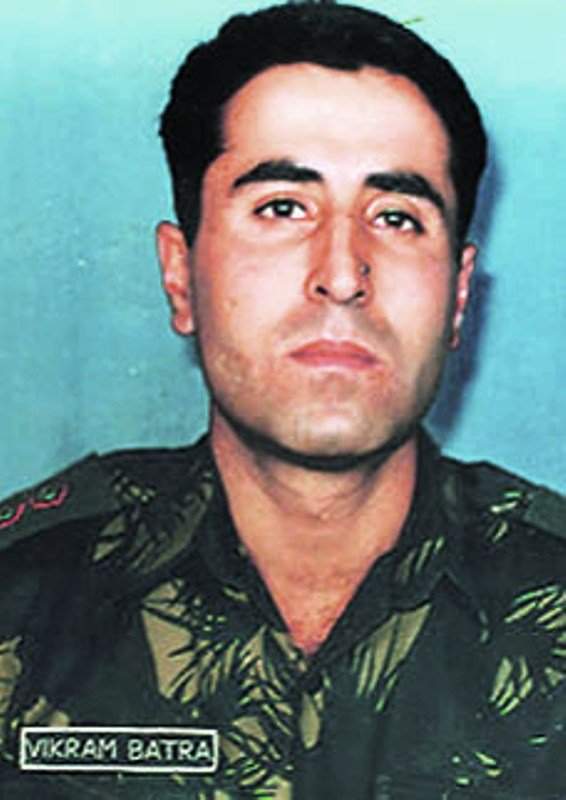 Captain Vikram Batra Sher Shah of Kargil: He was born on 9th September 1974 and was posted on the front during Kargil War. He played the main role in winning the five most important points of Kargil. He is was full of passion, loved by all. He was the last army man to get Paramveer Chakra. The man who saved many of his colleagues before he died.

As soon as Vikram is mentioned, they come on the tongue of the people –

“Either I will come behind the waving tricolor, or I will come wrapped in the tricolor. But I will definitely come”.

July 7 is also remember for the death anniversary of Captain Vikram Batra.

Some of the facts of his life –

2. On June 19, 1999, under the leadership of Captain Vikram Batra, the Indian Army snatched the point 5140 from the intruders. It was a big important and strategic point, as it used to be on a high, straight climb. Pakistani intruders hiding there were firing bullets at Indian soldiers.

3. After winning this, Vikram Batra went on to win the next point 4875, which was at a height of 17 thousand feet from the C level and used to climb 80 degrees.

4. Vikram Batra is the last person to get Paramveer Chakra. He died on 7th July 1999 while saving a wounded officer. While saving this officer, the captain said, “You go away. You have wives and children’, which made him extraordinary.

6. His partner Naveen, who was with him in the bunker, says that a bomb suddenly exploded near his leg. Naveen was badly injured. But Vikram Batra immediately removed him from there, which saved Naveen’s life. But half an hour after that, the captain lost his life while saving another officer.

7. Naveen becomes emotional while telling about Vikram Batra. One more story he narrated that Pakistani intruders shouted during the fight, ‘Give us Madhuri Dixit. We will be soft-hearted’. Capt Vikram Batra smiled and fired on his AK-47 by saying, ‘With the love of Madhuri Dixit’ and killed many soldiers.

8. Stories of the bravery of Captain Vikram Batra are not only narrated in India, Vikram is very popular in Pakistan too. The Pakistani army also used to call him Sher Shah.

9. Capt Vikram Batra death: Vikram Batra joined the Lieutenant’s post on 13 December 1997 at 13 JAK Rifles. Within two years, he became the captain. At the same time Kargil War started. On July 7, 1999, he lost his life at 4875 points, but continued to save the lives of his fellow soldiers as long as he was alive.

10. His friend Naveen says that the captain kept his safety behind, that’s why he first saved my life by dragging me from the bunker.

11. Vikram loved Dimple Cheema. Both met at Punjab University. Dimple says that she and Vikram spent some beautiful months in Chandigarh.

12. Dimple remembers the time, saying, ‘Vikram’s selection was in the army in 1996, so he left college. Not a single day has passed when I have not remembered him. Even after moving away from me in the army, our love continued to grow. On returning from Kargil, both had plans to get married. But he did not return and gave me memories for a lifetime. ‘

13. ‘If Captain Vikram Batra had returned safely from Kargil War, he would have sat in my chair within 15 years.’ This was said by the then Chief of Army Staff Ved Prakash Malik.

Still remember watching this interview in mesmerised silence. Capt. #VikramBatra, Param Vir Chakra. Right before the recapture of Pt.4875 on this day 21 years ago. India would change forever. He was only 24. 🇮🇳🔥 pic.twitter.com/V2wlTHqIag

Today is the 21st anniversary of VikramBatra the brave son of mother India’s martyrdom . I dedicate my song from film LOC to him “ eik saathi aur bhi tha “

21 years ago I met the extraordinary #VikramBatra, Code name, Sher Shah, the swashbuckling soldier who was one of the first interviews I did at the #Kargil frontline and would be the first obituary tribute I'd write as well. It feels like yesterday to me. I can hear his laugh 1/n pic.twitter.com/TPUzSv1oeZ

NEW DELHI | The protesting farmers on Monday accused the Narendra Modi-led central government of being communal, fascist and autocratic and rejected the government's demand to...
Read more
Delhi

Sunny Leone spent a good time with her family during the lockdown. The actress is quite happy to be back on the set after...
Read more

A television actress has accused a casting director of rape. The Mumbai Police has registered an FIR against the director. Police said that the first...
Read more

Delhi: The third wave of Corona at Peak, Government hopes to reduce matters

NEW DELHI | New cases of corona in Delhi are setting new records every day. For the past several days, every 24 hours, around 7 thousand or...
Read more

DELHI | The Coronavirus investigation report has found 6,725 new cases in Delhi in the national capital during the last twenty-four hours, which is the highest...
Read more