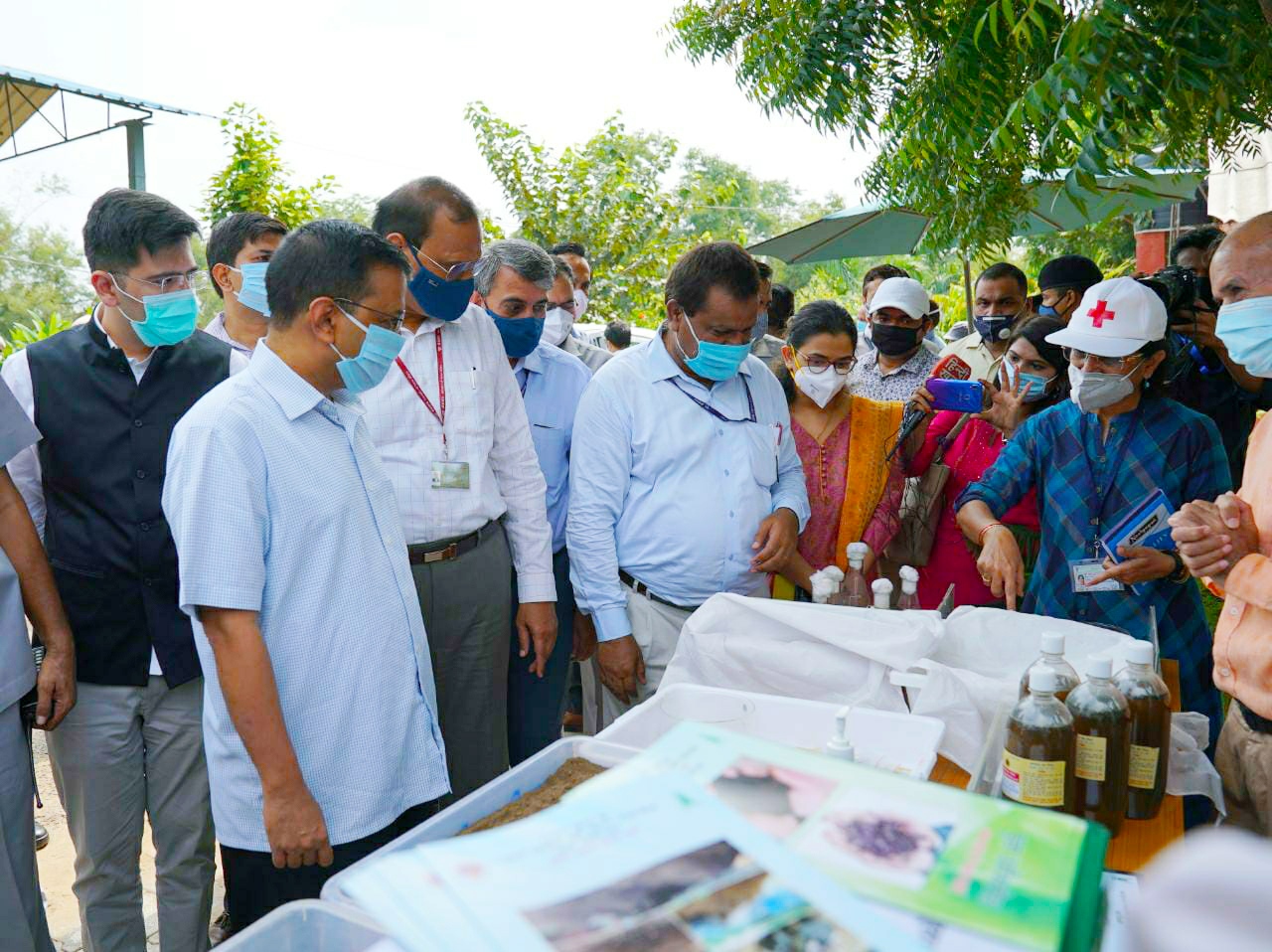 - Advertisement -
NEW DELHI: Chief Minister Shri Arvind Kejriwal visited the Indian Agricultural Research Institute (IARI) today, to see the process of the bio-decomposer technique of converting crop stubble into compost, which is deemed as a cost-effective way to deal with the issue of air pollution caused due to crop stubble burning. CM Shri Arvind Kejriwal said that this technique involves the spraying of Pusa decomposer capsules along with a liquid formulation using readily available elements, that will help decompose the stubble into compost, decrease the use of fertilizers and increase the productivity of the farm soil. He also said that he will meet the Union Environment Minister in a day or two to discuss the efficient and effective implementation of this simple, doable, and practical technique to stop stubble burning.
Briefing the media after his visit, CM Shri Arvind Kejriwal said, “Delhi and many other North Indian states are covered with smoke due to stubble burning in the neighboring states by the farmers. We visited the Pusa Agricultural Institute today and spoke to its director. They have developed a new and innovative technique, under which they give four capsules, with the help of which the farmers can prepare a 25-liter of a liquid mixture with jaggery and chickpea flour, which is sufficient to cover 1 hectare of land. When the farmer sprays the 25 liters of the liquid mix on the stubble, the stubble softens and melts down in 20 days. The farmer can then begin his sowing again and he does not need to burn the crop stubble. The soil loses its richness due to stubble burning, and it also destroys the useful bacteria and fungi in the soil, apart from causing harm to the environment. This improves the fertility and productivity of the soil as the stubble works as manure and compost for the crops and lesser fertilizer consumption will be required in the future. The cost of the capsule is very less, we will be getting a proposal mentioning all the important details such as cost per acre soon. This is the result of many years of hard work and efforts of the scientists, and they have got the validation after a year after all their pilot testing and projection. They have also given their technique a license for commercial exploitation. I will meet the Union Environment Minister in a day or two to discuss this and I will request him to speak to the neighboring states to take all measures to effectively implement it despite the crunch of time. We will surely implement this technique in a very efficient and effective manner in Delhi.”
On a question of why there is no action on stubble burning throughout the year, CM Shri Arvind Kejriwal said, “I agree that no major efforts have been made the whole year on stubble burning. I do not want to blame anyone but the central government is also trying its best. The union has held meetings, initiated new schemes and implemented custom hiring sectors, and given subsidies on new machinery. The scientists gave a presentation to me yesterday, and this is a very simple, doable, and practical approach. If we look at the net cost-benefit analysis, a farmer will get twice the profit of what he will spend. This is a new invention and Pusa Institute is one of the most reputed institutes in the country. We must implement this as soon as possible.”
Taking to social media, CM Shri Arvind Kejriwal tweeted, “Farmers are also worried about the pollution that is caused due to stubble burning every year. A technique has been developed by the scientists of IARI – Bio Decomposer. I visited to observe the technique today. Scientists believe that because of this, farmers will not have to burn stubble, the stubble will turn into manure and the farmers’ yield will also increase.”
The technology, called Pusa Decomposer, involves making a liquid formulation using Pusa decomposer capsules and readily available inputs, fermenting it over 8-10 days, and then spraying the mixture on fields with crop stubble to ensure speedy bio-decomposition of the stubble.
Advertisement
Team Janmat Samachar
Share
Facebook
Twitter
Pinterest
WhatsApp

Delhi FM Sisodia along with the FMs of other states discussed viable options to account for the shortfall in the economy suffered due to...