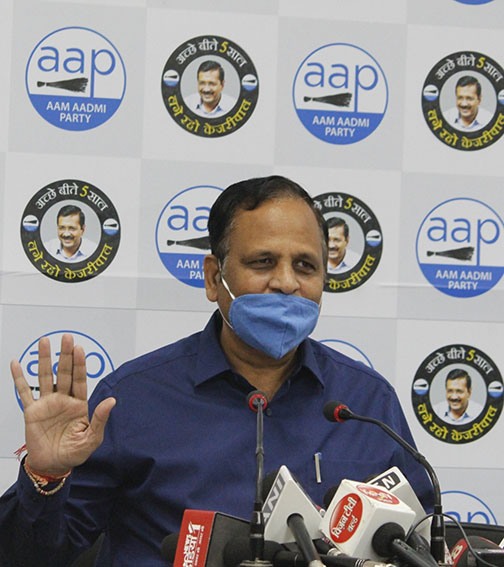 NEW DELHI| A new form of coronavirus has emerged in England, which the Delhi government has become cautious about. In Delhi, information is being collected about people coming to Delhi from England. Till now, the investigation of all those who have been informed has been started by the Delhi government. Delhi Health Minister Satyendra Jain said, “We are keeping an eye on the matter. In the last 2 weeks, all the passengers coming from England to Delhi are being traced. We have started the identification and investigation of all those passengers. The only way to protect yourself from any infection is to wear masks and take precautions regularly. ”

On the guidelines issued in England on the redesign of the Coronavirus, the Health Minister said, “According to scientists, this new form of the virus is highly contagious and is spreading rapidly. The coronavirus may change over time, but My only appeal to everyone is to be careful and always wear a mask when you get out of the house. If we follow the rules, we don’t need to panic with any form of a virus. ”

The Health Minister appreciated the cooperation of the people of Delhi and said that the residents of Delhi have followed all the Corona rules with the utmost care and this is the reason that Corona infections are under control in Delhi today.

According to the results revealed in the last 24 hours, the positivity rate in Delhi has been the lowest in 8 months. There have been less than 1000 new cases in Delhi for the last 3 consecutive days. Satyendra Jain told that the Delhi government is doing 80,000 tests daily.

Health Minister Satyendra Jain said that Delhi has the lowest positivity rate in the entire country. The Delhi government has made complete preparations for the vaccine. He said that all arrangements have been made to keep and distribute the corona vaccine and now just waiting for the vaccine to arrive.

The first phase vaccine will be provided to health care and frontline workers. After this, priority will be given to people above 50 years of age. The minister said that the introduction of the vaccine does not mean that the threat of the virus has been completely eliminated.

The Health Minister said that 939 new cases of the corona were reported in Delhi on Tuesday and the positivity rate was 1.14 percent. A total of 82,000 tests were conducted in Delhi on Tuesday. He told that the positivity rate in Delhi is continuously decreasing and this rate is the lowest in the last 8 months. Replying to the question of beds available for corona patients in Delhi, the minister said that at present only 2800 beds are inpatients and about 50 percent of ICU beds are still available.

For the last three days, less than 1000 new cases are being reported in Delhi and the positivity rate is also under control. Delhi has the lowest positivity rate from across the country.

These days, divorces are a common thing and with Bollywood having a list of marriages going kaput, there have even been divorces in the...
Read more