Delhi Government led by CM Arvind Kejriwal is working day and night to connect each household of Delhi with a new sewer line network: Saurabh Bhardwaj 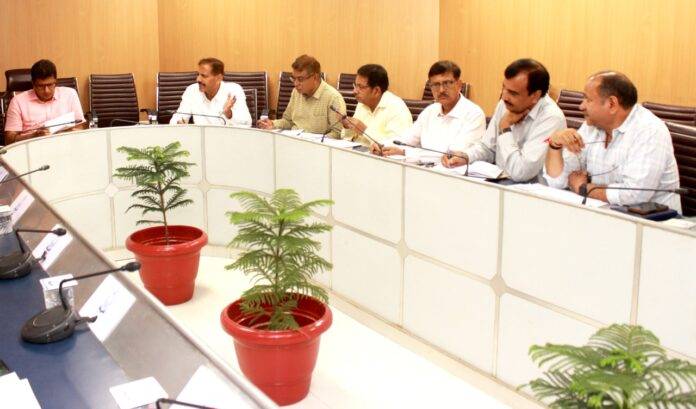 NEW DELHI: Delhi Jal Board Vice Chairman Shri Saurabh Bhardwaj chaired a crucial meeting at the Delhi Jal Board Headquarters – Varunalaya – with senior officials today. The meeting laid focus on the fast expansion of the network of modern sewer lines in the national capital that will help in collecting wastewater, allow its proper treatment in the STPs, reduce the pollution load in Yamuna and simultaneous cleaning of the river.

Timely completion of the projects concerning laying of the sewer lines across Delhi has become a primary aim of the CM Shri Arvind Kejriwal led Delhi Government. Shri Saurabh Bhardwaj said, “In this day and age it is pertinent to ensure that every single household is connected to the sewage network. We strive to make Delhi a 100% sewer connectivity state. In this 21st century, we as a welfare government cannot accept that even a single citizen having to live without a proper sewage connection in Delhi.” He said that procedures should further be simplified to provide more speed to the progress of the projects.

The DJB Vice Chairman also directed the officials to focus on the areas that are yet to be connected with the new sewerage lines. He instructed the officers to check open drains from households and colonies that are located alongside Yamuna immediately by linking them with sewer lines.

Shri Saurabh Bhardwaj reiterated that proper sewer lines are necessary for the ultimate aim of the Kejriwal Government to clean Yamuna River by 2025. The DJB Vice Chairman also reasoned that linking households with sewer networks directly translates into better hygiene and sanitation facilities in localities. Disease burden decreases drastically and the most significant decrease is found in vector borne and communicable diseases. This is because the wastewater coming out from households does not end up in open drains, parks and other public spaces. This leads to overall improvement in health of the residents, mainly, women, children and the elderly.

Shri Saurabh Bhardwaj said that DJB is also focusing on augmentation and addition of STPs across Delhi to support the expansion of the sewage network in the national capital.

DJB is laying new sewer lines in a number of unauthorised colonies and settlements in the areas of Bijwasan East, Sangam Vihar, Devli, Dichaon and Shikarpur. Recently, Deputy Chief Minister of Delhi and Chairman of Delhi Jal Board, Shri Manish Sisodia, had accounted in a key meeting of the board that was participated by Shri Saurabh Bhardwaj and senior officials that DJB will develop a new sewage network in unauthorised colonies and villages of Delhi to arrest wastewater and treat it through augmentation of STPs.

Presently all sewage generated in these areas is discharged into local ponds, septic tanks, and storm-water drains. The discharge of the drain goes indirectly into the Yamuna. In such a situation, after laying sewer lines in unauthorised colonies and villages and simultaneous augmentation of STPs will help to collect and treat water efficiently. This will allow only clean water to outfall in the Yamuna River.