Home Top Stories Government, the party have nothing to do with Pegasus report: BJP
Top Stories

Government, the party have nothing to do with Pegasus report: BJP 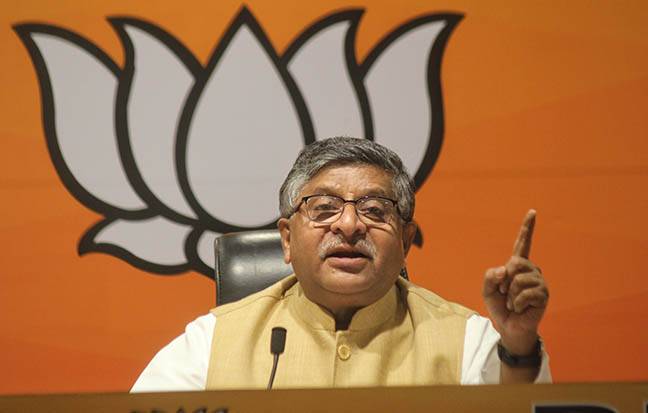 New Delhi| Terming as “baseless” reports of alleged spying of prominent citizens using Israeli Pegasus spyware, the ruling BJP on Monday said there was no evidence so far to be linked to the central government or the party. Addressing a press conference, former Information Technology Minister and senior BJP leader Ravi Shankar Prasad said, the party strongly denies the baseless and baseless remarks made by the Congress against the BJP.

“So far there is not a single piece of evidence linking the central government or the BJP to this controversy,” he said. This is a case of digital spyware, and thus at least some solid evidence in the form of data must be presented in order to justify the allegations.

Prasad said, there can be many possible databases around the world, including numbers or names of people. How does such a database belong to the Government of India unless some evidence is presented? The story itself claims that the presence of a phone number in the database does not necessarily mean that there was an attempt to hack or infect Pegasus.

Taking a dig at the web portal (The Wire) that publishes the reports, Prasad said, “Yesterday, we saw a sensational report by a fringe news portal which is infamous for spreading fake news. However, even after days of construction, it turned out to be a moist squib, as acknowledged by many on social media.

He also attacked Amnesty International and said, “Can we deny that institutions like Amnesty had a proscribed agenda of anti-India in many ways? When we asked him about his foreign funding as per law, he left India.

Those who broke the story themselves did not claim that the presence of a particular number in the database confirms that it is infected with Pegasus. It is most important to reveal all the facts before the nation. WhatsApp specifically protested before the Supreme Court. The court said that its data cannot be hacked by Pegasus.

Prasad asked why only India was being targeted for the use of spyware, while 45 countries were using it.

Facebook
Twitter
Pinterest
WhatsApp
Previous articleThe rain became a disaster: 9 more people died in Mumbai
Next articleCongress is more concerned about BJP than itself: PM
Abid Ali
Sr. Content Editor & Social Media Manager at Janmat Samachar. Has Passion for writing about the Nation & the World and irrefutably telling about their issues to the masses.