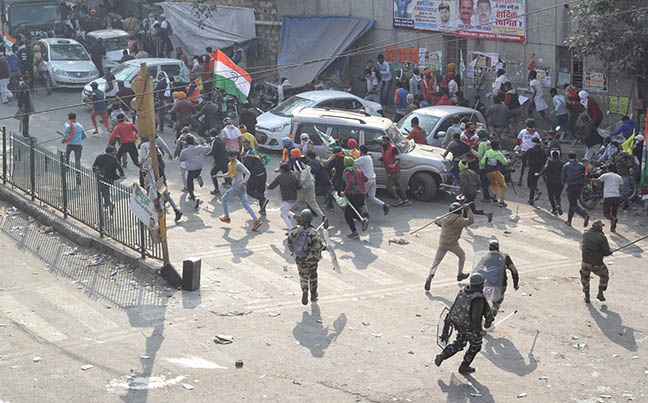 New Delhi | The Aam Aadmi Party (AAP) condemned these incidents the next day after the commotion during the farmers’ tractor rally, clashes with policemen, damage to public properties and hoisting the religious flag on the Red Fort, the ruling Bharatiya Janata Party at the Center Attributed to. Raghav Chaddha, a Delhi MLA and Punjab in-charge of the party, said at a press conference on Wednesday, “Yesterday we all saw what happened in Delhi and most importantly at the Red Fort.” We have condemned the violence and it should not happen further.

Holding the BJP responsible for the violence, he said that Deep Sidhu, who was allegedly caught hoisting the religious flag, belonged to the BJP. He said, Deep Sidhu, the mastermind of yesterday’s violence, has a deep connection with PM Narendra Modi and Home Minister Amit Shah.

He claimed that AAP would prove that the Prime Minister and some central agencies were behind this whole incident, as he showed a picture of Deep Sidhu with actor-turned-politician Sunny Deol (BJP MP from Gurdaspur).

Chadha alleged this is a picture taken at the Prime Minister’s House which is a place where no person can enter.

Chadha instigated the violence to divert public attention from the real issues of farmers ‘protests and to discredit peaceful farmers’ protests against the three-farm law enacted by the BJP-led central government, for which the BJP is fully responsible.

The AAP leader said, “BJP should disclose why it is protecting Deep Sidhu.”

New Delhi| The Bharatiya Janata Party, which is involved in the West Bengal assembly elections, is busy making inroads among every section. From intellectuals to laborers,...
Read more

BJP will make Puducherry the ‘jewel’ of India: Amit Shah