Home Sports India-Pakistan test in the desert of UAE today, the eyes of the...
SportsTop Stories

India-Pakistan test in the desert of UAE today, the eyes of the world on the battle of Virat vs Babar; Kohli’s ‘not out’ record! 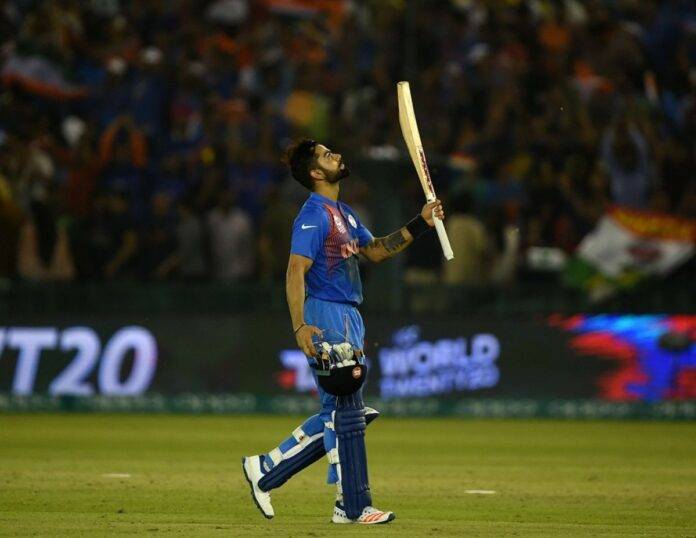 Dubai | A storm erupted in the deserts of UAE when Sachin Tendulkar’s bat fired fireworks against Australia in Sharjah. The thing is from 1998. Now after 23 years, due to the sound of the storm, once again strong tornadoes have started rising in the desert.

This sound is from the biggest match in the world of cricket.

This storm is of Annul-e-Jung of India and Pakistan and this test is of crores of fans apart from 22 fans of both the teams. This clash of India and Pakistan will start on October 24 at 7.30 pm in the Dubai ground. If there is this collision then there will be questions and the answer will also be given whether Virat Kohli’s bat will speak in this superhit match or will Babar Azam be heavy? The question will also be on Hardik Pandya’s bowling and then on the picture of Team India’s playing XI.

The answer to all these questions will confirm whether Team India’s winning streak, which has been going on for 29 years and 12 matches in the Cricket World Cup, will continue or whether Pakistan’s team will be able to create a new history.

One thing is often heard in the match between India and Pakistan. That is, this match is like normal matches. Virat Kohli also reiterated this in his press conference, but Virat himself must have known that this match is not an ordinary match. Of course, Team India has a hundred percent record of winning against Pakistan in the ICC World Cup, but when you land on the ground of reality, then the sky figures do not exist. This is the reason why no matter how much Virat Kohli says, but when the eyes of the whole world are fixed on one match, people should decide their day’s work according to the time of the match, there is talk of a match on the street, nooks and squares, Then it was no ordinary match.

If we weigh the teams of India and Pakistan on two pans, then surely the thorn will lean towards Team India. But T20 is the format where Raja becomes Ghulam and Karinde does not take long to become King. It is only a matter of 40 overs, if any team can dominate, then the results can be surprising. Especially in the pressure match between India and Pakistan, nothing can be said. We have also seen Team India, adorned with legends, disintegrate under pressure in the 2017 Champions Trophy.

We have also seen Scotland win over Bangladesh in the qualifying matches of the current World Cup. In such a situation, this match will be between India’s batting and Pakistan’s bowling, as has always been the case. This time there are arrows like KL Rahul, Rohit Sharma, Virat Kohli, Rishabh Pant and Hardik Pandya in Team India’s quiver, while Pakistan has attackers like Imad Wasim, Shaheen Shah Afridi, Haris Rauf, Shadab Khan and Hasan Ali. India has stars like Jasprit Bumrah, Mohammed Shami, Varun Chakraborty and Ravindra Jadeja while Pakistan has stars like Babar Azam, Mohammad Rizwan, Fakhar Zaman, Shoaib Malik and Mohammad Hafeez. Now the thing to be seen will be whether the victory will be in the name of the greats of India or the might of Pakistan will be seen.

The Indian team has become the champion in the 2007 T20 World Cup edition. India won the tournament by defeating Pakistan by 5 runs in the final. Team India has played 21 matches out of total 33. In the year 2016, the team reached the semi-finals but then had to face defeat at the hands of West Indies.

In the T20 World Cup, Pakistan

has won the T20 World Cup trophy in the year 2009. The team had won over Sri Lanka by 8 wickets. Pakistan has played 34 T20 matches so far where they have won 19 matches and lost 15. Pakistan could not reach the semi-finals in the year 2016.

India has fought 5 times in the T20 World Cup between Pakistan so far. India won all the five matches. Both the teams first faced each other in the 2007 T20 World Cup. The result was a ball out in which India won. Then beat Pakistan by five runs in the final in Johannesburg. India had won a one-sided victory over Pakistan in the year 2012 which was won by 8 wickets. In the year 2014 and in 2016, India defeated Pakistan by 8 wickets and 6 wickets.

Virat Kohli is the highest run scorer in T20 cricket. In his entire career so far he has played 89 matches where he has 3159 runs to his name at a strike rate of 139.04. At the same time, Babar Azam is known for his strong performance in every format. In T20, he has scored a total of 2204 runs in 61 matches where his average is 46.89. He has a total of 20 half-centuries to his name and a T20 International century as well. In this format, he is included in the list of three Pakistan batsmen who have scored more than 2000 runs. This includes Mohammad Hafeez (2429) and Shoaib Malik (2335).

Who is the king of captaincy?

Kohli has so far captained India in 45 T20 matches in international cricket. India has won 29 matches and lost 14. Babar has captained Pakistan in 28 matches where they have won 15 and lost 8.

Pakistan could not get Virat out even once, Virat

will try once again that the bowlers of Pakistan could not get him out. Because that’s what the records say. Virat has so far played 3 innings against Pakistan in the T20 World Cup, in which he has been not out all three times. He has scored 78, 36 and 55 runs in these three matches.

Facebook
Twitter
Pinterest
WhatsApp
Previous articleJammu and Kashmir: Snowfall begins in high altitude areas, heavy rain in plains
Next articleT20 World Cup: Pakistan won the toss and decided to ball
Abid Ali
Sr. Content Editor & Social Media Manager at Janmat Samachar. Has Passion for writing about the Nation & the World and irrefutably telling about their issues to the masses.