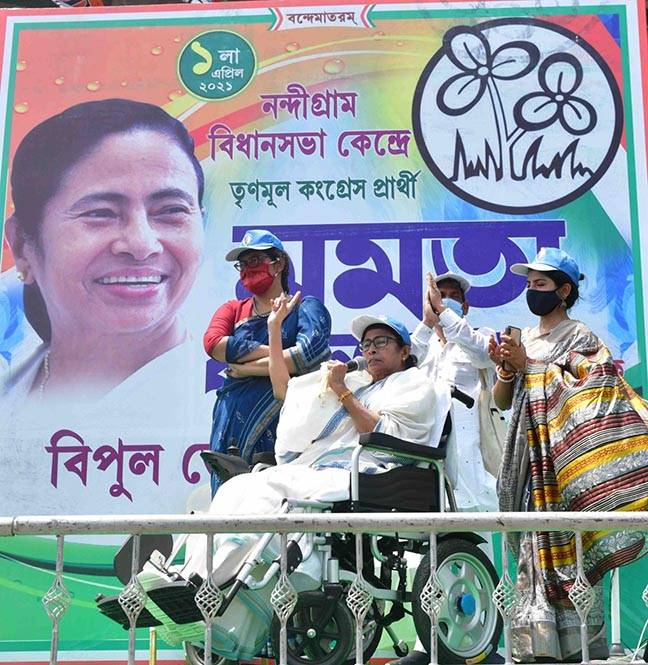 Kolkata| Mamata Banerjee played the gotra card in Nandigram to woo the voters before campaigning for the second phase of the West Bengal assembly elections stopped. Addressing an election public meeting in Nandigram, he said that his gotra is Shandilya, after which politics in the state has become hot in the middle of elections. At a time when the Bharatiya Janata Party (BJP) is striving to win a state with its Hindutva image, where it has never won, now Mamata Didi is playing the card of Hindu Brahmin in a campaign with Bengali pride. Huh.

To enable Mamata to have electoral benefits in every way, her Hindu Brahmin identity is being enhanced at a rapid pace in the second phase of the eight-phase assembly election. Mamata is contesting from the high-profile Nandigram seat, where she is pitted against Shubhendu Adhikari, who joined BJP from her party Trinamool Congress (TMC).

The BJP retaliated to Mamata’s remarks and said that it shows that the defeat is certain. BJP leader and Union Minister Giriraj Singh said that Mamata is declaring her gotra in desperation.

Singh said, “I don’t need to say what my goutra is, as I write this. But she is saying for fear of losing the election. Mamata Banerjee, please tell me if Rohingya and infiltrators are also from the Shandilya gotra Are? Their defeat is certain. ”

In response to Giriraj Singh, TMC MP Mahua Moitra tweeted, “Union Minister Giriraj Singh says that Mamta’s gotra belongs to Rohingyas. We are proud of it. They are far superior to these Chutiawala demons.”

The second phase of voting in West Bengal is on April 1, but before that, the politics of Bengal has got heated. Where Mamta Banerjee said her gotra on Tuesday, after which Giriraj Singh to Asaduddin Owaisi has given a statement.

AIMIM chief Asaduddin Owaisi has asked what should leaders like those who are not Shandilya and not Janeudhari.

Owaisi tweeted on Wednesday, writing, “What should happen to people like me, who are not Shandilya or Janaudhari, are not devotees of the gods, do not recite Chalisa or anything? Every party feels that to win it You have to show your Hindu credibility. Unethical, insulting … and it won’t be successful either. ”

On the last day of campaigning for the second phase of voting, Mamata Banerjee had declared her gotra at a rally. He had said that his gotra is Shandilya, but he has described mother-mother-manus in many places.

The chief minister had said, “During the campaigning for the second phase, I went to a temple, where the priest asked me my gotra. I called him Mata-Mati-Manush. It reminds me of him, when I went to Tripureswari temple in Tripura I was there and the priest also asked me about my gotra. During that time also I had told my mother-mother-man-man. Actually, my gotra is Shandilya.

Siya Kakkar father is silent on Siya’s suicide, pray for peace of soul