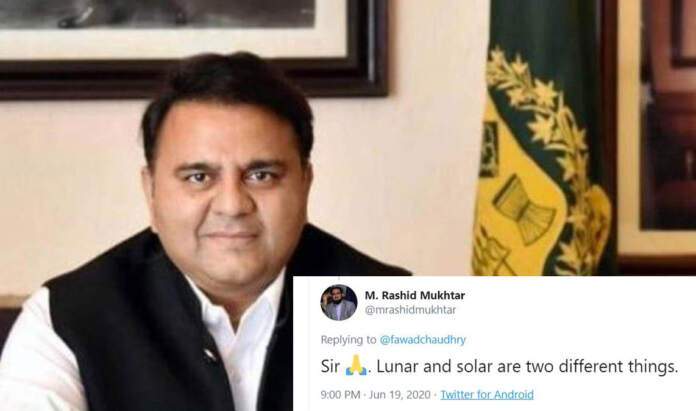 Pakistan’s science and technology minister does not know the difference between sun and lunar eclipse. Soon after the tweet, he was trolled on social media. Twitter users made fun of him for “misinformation”.

See More; Pakistani Maulana says that doctors and vaccines cant help, only Allah can save us from Coronavirus, Ask for forgiveness

Islamabad The person who has been a minister of science and technology in Pakistan, who has the responsibility of taking the country forward in scientific direction, does not know the difference between solar eclipse and lunar eclipse. The entire world saw a solar eclipse on June 21 after a darshan, but Chaudhary Fawad Hussain was spreading information about the lunar eclipse during this period.

Haha see our minsters, without rechecking & confirmation they r putting such wrong info on their accounts. I am thinking how they are managing such ministries?

Soon after posting that tweet, he was trolled on social media. Twitter users ridiculed him for giving him “misinformation”. Some reminded him that it was a solar eclipse, some asked him to retract the tweet, while some others who shared only funny memees in his tweet.

Let’s say that Skywatchers in Pakistan saw a dramatic “Ring of Fire” solar eclipse. This astronomical event was observed in Sukkar and Gawdar regions with coverage above 98 and 97 percent respectively. According to Pakistan Meteorological Department, the partial eclipse began in Pakistan at 8.46 am and ended at 2.34 pm. Eclipse Karbi was at its peak at 11.40 am. Karachi and Lahore saw 91 per cent eclipse, while Gilgit saw the lowest coverage of only 74 per cent.

Pakistan minister made a blunder on social media by tweeting on twitter.

Launch of website of Professor Rakesh Sinha on 5th October