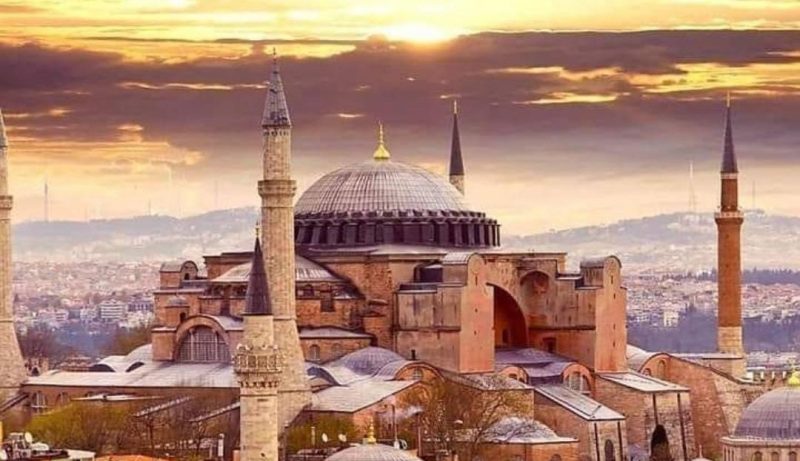 Turkey’s Supreme Court has ruled to convert Istanbul’s famous Hagia Sophia Museum into a mosque. It was built in AD 537, during the reign of the Roman emperor Justinian I, it was then the world’s largest interior space and the first to employ a fully pendentive dome. Built as the cathedral church of Constantinople between 532 and 537 on the orders of the Roman emperor Justinian I. It remained the world’s largest cathedral for nearly a thousand years, until Seville Cathedral was completed in 1520. In 1204, it was converted by the Fourth Crusaders to a Roman Catholic cathedral under the Latin Empire, before being restored to an Orthodox cathedral upon the return of the Byzantine Empire in 1261. In 1453, Constantinople was conquered by the Ottoman Empire under Mehmed the Conqueror, who ordered the cathedral converted into a mosque. In 1935, it was secularized into a museum.

This world famous building of the Turkish capital Istanbul was built by Justinian, the ruler of the Byzantine Empire, in about 532 AD. At that time the city was known as Kustuntuniya or Constantinople. After the construction was completed in 537 AD, this building was made a church.

How church became a mosque!

In 1453, Constantinople was conquered by the Ottoman Empire under Mehmed the Conqueror, who ordered the cathedral converted into a mosque. After which the name of Kustuntunia was changed to Istanbul.

Story of a mosque to be a Hagia Sophia Museum

When Hagia Sophia Museum was built? In 1930, when the founder of modern Turkey, Kamal Ata Turk, took power, he converted this mosque into a museum. In 1935, Hagia Sophia was made a museum and opened to the general public.

UNESCO has warned Turkey on converting the Hagia Sophia Museum into a mosque. UNESCO said that the government must talk to them before taking any decision. This 1500 year old building is included in the UNESCO World Heritage Site. A UNESCO spokesman said that Turkey must ensure that its universal values ​​are not affected before any changes are made. For this, the investigation of the World Heritage Committee is also necessary.

495 new cases of Omicron were reported in India, the total number reached 2,630