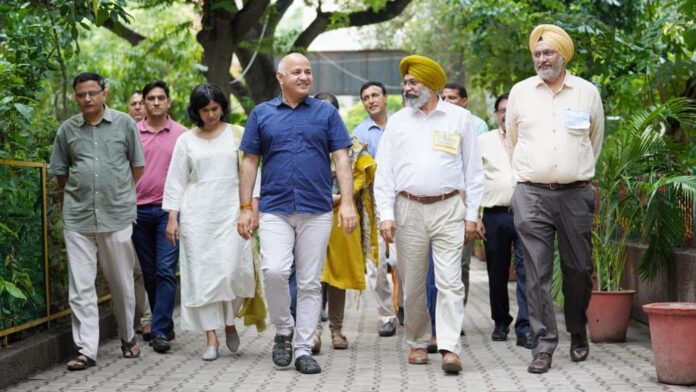 NEW DELHI:  Over the past seven years, the government school education system in Delhi has undergone a major shift under the leadership of Chief Minister Shri Arvind Kejriwal. Various education reforms implemented in Delhi Government Schools are now being discussed all over the world. A delegation of 170 government school teachers and educators of Punjab led by their SCERT Director visited Delhi Government Schools on Thursday to see the teaching-learning activities including Happiness Classes. They will attend the closing ceremony of Happiness Utsav on 29th July at Tyagraj stadium.

After their school visit, Deputy Chief Minister Shri Manish Sisodia interacted with them and motivated them to be the torchbearers of the education revolution in Punjab. While interacting with the teachers, Shri Manish Sisodia said, “Whatever we do in the field of education today, our aim should be the upliftment of the nation. When we began working on education in Delhi, we used to have many interactions with the school teachers and they gave us ideas for development of the Delhi education system. Now, government school teachers of Punjab need to take this responsibility for their state and ‘think like education ministers’. This will help them move the wheel of change in the education system of Punjab.”

He suggested the teachers to always be in touch with the Punjab Education Minister and keep sending him the suggestions for implementing various reforms.

Shri Manish Sisodia further added that there are many countries like the UK, USA, Japan and Finland which are seen as inspiration all over the world. They all stand developed and tall today because of their strong education system. He said, “Over the years, there is one thing that has gone wrong in the education system here. We were always taught history of the nations with a political viewpoint, administrative viewpoint and entrepreneurial viewpoint but never with the viewpoint of education. We were never taught about the role of education in the history of any nation. If we want to see our nation developed then we need to study the role of educational institutions in the history of developed nations.”

The Deputy Chief Minister further said that we are implementing the curriculum on entrepreneurship in Delhi government schools now to develop entrepreneurial mindset among children, but Punjab has a history of this mindset. Centuries back when there was no road or rail infrastructure they transported iron ore from Jharkhand and Chattisgarh, and made equipment in their factories in Punjab. Today Punjab just needs to inculcate this mindset more efficiently among students through education.

While further motivating them, Shri Manish Sisodia said, “Delhi government and its team studied the various education models across the world and created the Delhi Education Model. Delhi was not a cut and paste model neither would Punjab be. Teachers of Punjab need to work on state specific requirements and design their own education model for Punjab”. He added that this country will flourish only if education is the top priority of all the political parties.

Another teacher added that the Happiness Curriculum and Entrepreneurship Mindset Curriculum are a revolution in the field of education. “I was amazed to see the confidence of students and their ability to speak up openly. They know what exactly they are being taught and how this education will help them in future, which means they are getting the right guidance. I would like to implement such practices of guidance and interaction in schools of Punjab too,” he said.

It is to be noted that these teachers will also be a part of the celebration of 4 years of “Happiness Curriculum” at the closing ceremony of Happiness Utsav on July 29.

Facebook
Twitter
Pinterest
WhatsApp
Previous articleHARYANA movie Starcast Came to Delhi for Movie Promotions
Next articleSonu Sood to build a school for the underprivileged in Shirdi on the occasion of his birthday!
Team Janmat Samachar

Mumbai police is investigating the suicide case of Sushant Singh Rajput and now there are shocking revelations in the case.

Fathers Day 2020: When, where and how did Father’s Day begin?