Home National Delhi Solar energy in Delhi needs to be converted into a mass movement,...
NationalDelhi

Solar energy in Delhi needs to be converted into a mass movement, more and more people should join hands in using solar energy: CM Arvind Kejriwal 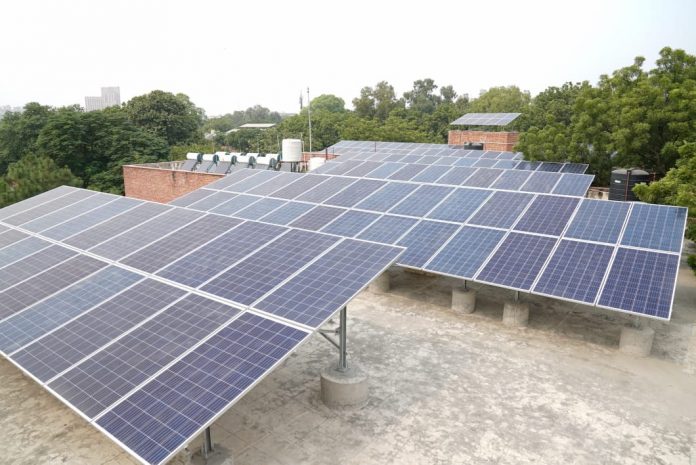 New Delhi: Inaugurating the 218 kWp solar power plant at Lady Irwin College today, CM Shri Arvind Kejriwal said that to strengthen the solar power usage in Delhi, the solar energy has to be transformed into a mass movement. He said that the Delhi government has done formulated major policies for solar energy usage in the city, such as Mukhya Mantri Solar Power Yojana, that includes incentivizing the installation of solar power plants for residential and commercial properties and Mukya Mantri Kisan Aay Badhotri Solar Yojana that includes increasing the income of farmers by three to four times. He also said that Green Energy is the future of resources of energy, and Delhi will soon become the Solar Capital of India through such initiatives.

CM Shri Arvind Kejriwal said, “I feel glad to be inaugurating the 218 kWp solar power plant at Lady Irwin college today, Lady Irwin College is one of the most prestigious colleges of the country. The solar power journey of Delhi has just begun, and we do not have many achievements in this space. Considering that, when institutes like Lady Irwin College take initiatives from the forefront, they turn into an example and an inspiration for other institutes and organizations. I want to congratulate Lady Irwin College for taking an initiative. I want to thank Okridge energy for successfully completing the project despite adverse conditions and time constraints. In the last few years, we have formulated a policy framework for solar energy. 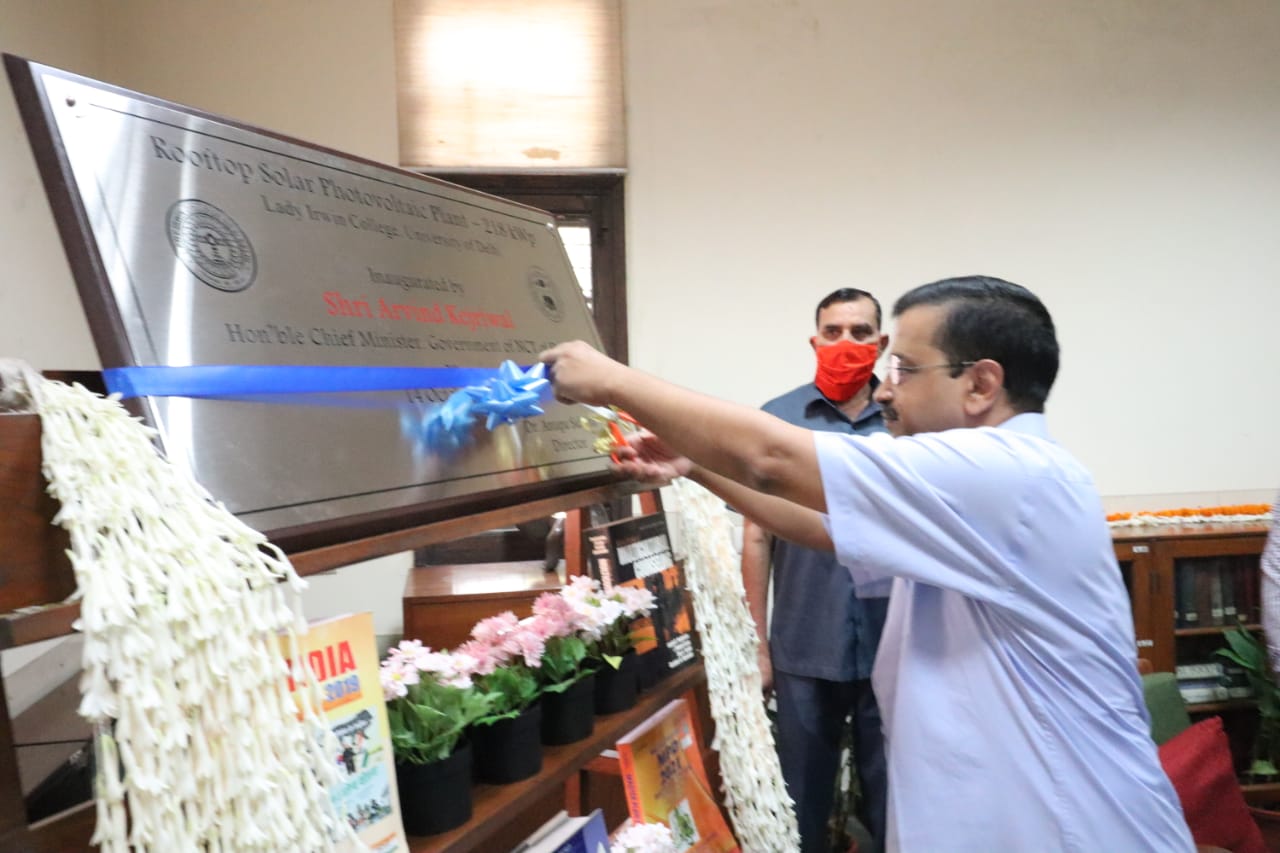 Two policies were designed by the Delhi government, the first was expanding solar power generation to the citizens of Delhi. Solar power was not affordable and is not under the affordability bracket of the general public. Under the policy, the people only had to give their rooftops. A company would install the solar power panel on the rooftop, and Hydroelectric will provide a subsidy on the solar power panel so that the initial spending is less. The power company would then sell power to you, as well as to other power companies. The residents, RWAs, or any entity which is installing the solar power panel, does not have to spend any capital cost, and in fact, they will save money on power consumption as well. They will be able to save lakhs by just giving their rooftops and completing or signing on some documentations. Our second policy is for the farmers, where if the farmers permit installation of solar power panels at some height and the farmers will receive rent from the solar power plants. They can also continue cultivating their farmlands. This increases their income by three to four times. They can start earning 1 lakh per acre instead of Rs. 40000-50000 per acre. Our total solar power generation was 7 MW and has gone up to 177 MW in four years. We have to increase the scope of utilizing solar energy in Delhi.
We have to create a solar energy movement in the city to promote the usage of solar energy. We have to create awareness around this scheme. We have to create a movement so that RWAs, the general public, government, and private institutions, all can install solar power plants. I hope that we will begin a solar energy movement in the city and I am certain that Delhi will become the Solar Capital of India. The people of Delhi have done some commendable work in the last four to five years, and the world is appreciating the health and educational infrastructure in Delhi. 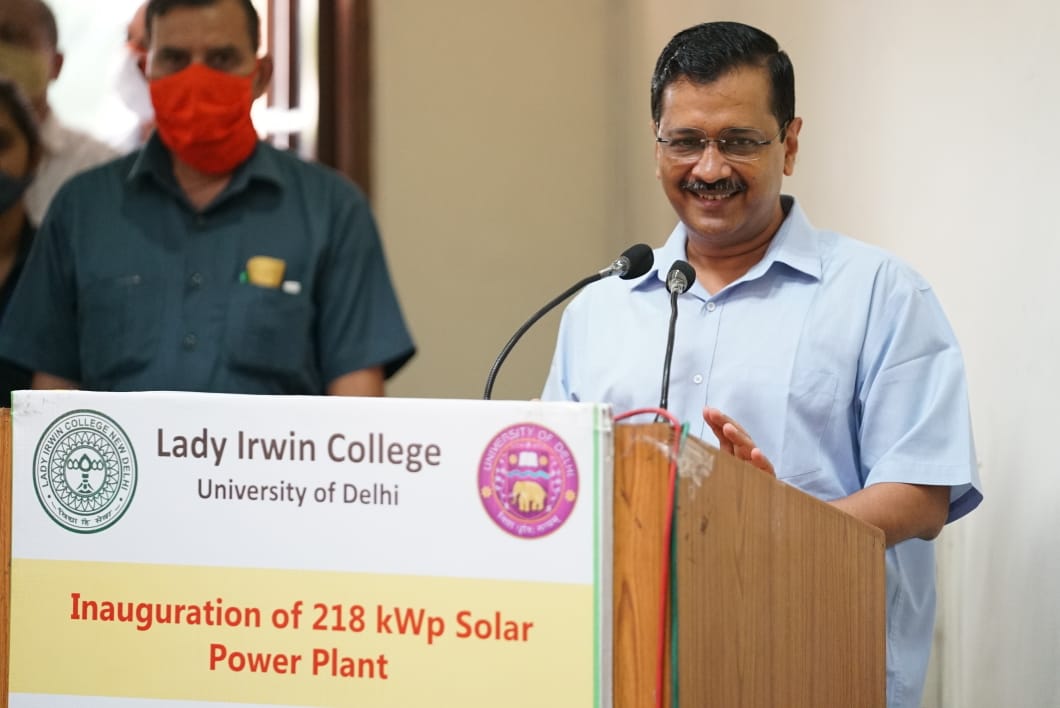 The EV policy, which has been formulated recently has been recently applauded. Out of all the available sources of energy, the future belongs to Green Energy. Thermal energy is a polluting source of energy. We have shut down both the thermal power plants and there are still 11 thermal power plants around Delhi. For Hydro-electric power plants, a large section of land has to be acquired and whole villages had to be submerged. Solar power energy can be done on a local level. I want to congratulate the NDMC and Lady Irwin College for this initiative.”

Delhi has shown the way in being at the forefront of expanding the scope of solar power energy in the city. Some of the schemes to promote solar energy in Delhi are introducing Delhi Solar Energy Policy 2016, Mukhya Mantri Solar Power Yojana and Mukya Mantri Kisan Aay Badhotri Solar Yojana.

Under the Delhi Solar Energy Policy 2016, various locations in the capital have been solarized to promote the usage of solar power. In the last four years, around 206 Delhi government schools have been solarized. Rooftop solar power plants have been deployed on more than 15 Delhi University Colleges and all major ITI, medical, polytechnic, and government engineering colleges and educational institutions. Some prominent installations are done in colleges such as DTU, NSIT, GGSIP University, and IGDTUW. Tihar, Rohini, and Mandoli Jails are also solarized.

The Delhi government introduced Mukhya Mantri Solar Power Yojana in September 2018, which was envisaged accelerating the adoption of solar photovoltaic in the residential sector (including Cooperative Group Housing Societies CGHS) apart from the institutional and government sectors.

Group Net Metering and Virtual Net Metering for Renewable Energy, Guidelines 2019 – As per guidelines, GNM Framework would be applicable for all consumers category in Delhi. Whereas, VNM Framework shall be applicable for residential consumers, government establishments, and Renewable Energy Generators registered under Mukhya Mantri Kisaan Aay Badhotari Yojna (MMKABY).

According to the scheme, the maximum of one-third surface area of farmland can be used for the installation of solar panels in such a way that agriculture activity is not affected. This will increase the annual income of farmers in the national capital by three to five times.

A demonstration Solar project of 110 kW under ‘Mukhyamantri Kisan Aay Badhotri Solar Yojana’ is currently in the development stage at Krish Vigyan Kendra Ujwa, Delhi. It will be commissioned by November 2020.

DMRC has installed more than 20 MW solar projects in Delhi. DMRC is also getting around 50 MW of electricity from the REWA Ultra Mega Solar Power Project (of the total capacity of 750 MW).

The Delhi government has signed low tariff renewable energy power purchase agreements and has played a major role in enabling DISCOMS to enter into PPAs for 2000 MW of renewable power at the lowest rates in the country of about Rs 2.8 per unit.

BJP to contest 115 seats in Kerala, Election Committee has decided the names of the candidates