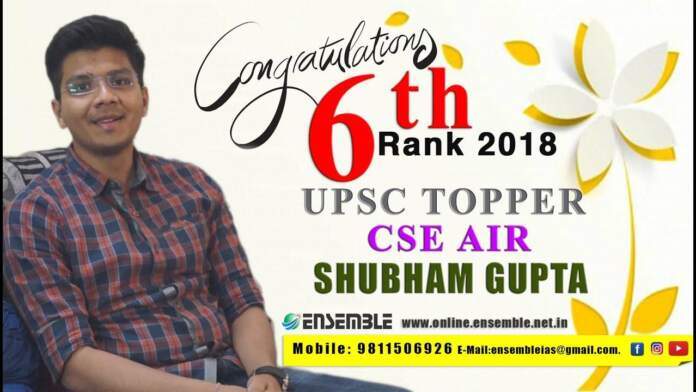 Shubham, who considers his father as a role model, says that even in the period of financial bankruptcy, his father’s ‘Die from Spirit’ inspired him a lot …

New Delhi, Motivational Story: There comes a time in everyone’s life when things are happening against you, or even if you try many times, there is no failure. But, should we sit down with disappointment from failure? Every defeat goes by teaching us that more effort is needed. So we should not stop trying. Whether our victory is guaranteed in our next or final attempt.

The story of Shubham Gupta, who secured the 6th rank in the IAS Examination of 2018, shared the story of success and struggle as well as his preparation strategy. Shubham Gupta attempted for the fourth time in the IAS exam and secured the sixth position in the All India Rank list. Shubham did not give up on not achieving his goal even after three attempts, and finally achieved his goal in the fourth attempt.

Shubham made his first attempt in the year 2015, but he could not pass the preliminary examination. Then in the year 2016, he made his second attempt and cleared all stages – prelims, mains and interviews and achieved the rank of 366. Due to which he was selected in Indian Audit and Account Service. Shubham tried again in the year 2017, but this time he could not clear the prelims exam. This was his third attempt. But Shubham Gupta still did not give up and in the year 2018, he tried for the fourth time and got the 6th rank in the IAS Exam 2018.

The family was financially strapped, used to study along with work at the shop

Shubham completed his early education from Jaipur, Rajasthan. Then due to financial constraints his family shifted to Dahanu Road, a small village in Maharashtra. Shubham completed his education from 8th to 12th in a school near Vapi, Gujarat. Shubham and his family struggled financially for some time. To help his family, Shubham worked every day at the family shop on Dahanu Road after completing his school in Vapi. But he never compromised on his studies even in the days of struggle. So he used to take his books to the shop to use his time both at school and in the shop. He also studied while working. In this way Shubham got good marks in his school examination.

Trust yourself and get success

Shubham explains that the most important thing to prepare for the exam is to believe in yourself. Both success and failure are part of life and one should not feel despair at the time of failure. The second most important thing is to give 100% of your preparation. Try to find and create an environment that helps you bring out your best abilities.

Preparing for such preliminary examination

Shubham started preparing for the preliminary exam in the year 2015 and he started reading the newspaper first. This helped them to know what is happening around in matters like environment, national and international affairs or the Indian economy. Then he started preparing for the subject. Picked a topic and then read the NCERT book related to that topic. They divided courses and completed the subjects one by one. At the same time, he also practiced mock test to assess his strength and weakness.

This is the strategy created for the main exam

Shubham explains that for the main exam you have to get deep knowledge of the subjects to express yourself well in the exam. I started making notes for my optional subject right from the beginning of my preparatory exam preparation. I mainly focused on answer writing practice. I used to give GS 1, 2 3, 4 papers, optional 1 and 2 subject papers and at least 2 mock tests of essay writing papers. Your focus should be to complete the paper, even if you do not know the answer in the descriptive paper.

Important points of interview round

Shubham explains that my role model is my father, because he has struggled a lot in his life. He managed to improve and bring balance to our lives even while battling financial bankruptcy. His ‘Never Say Die Spirit’ really inspires me.