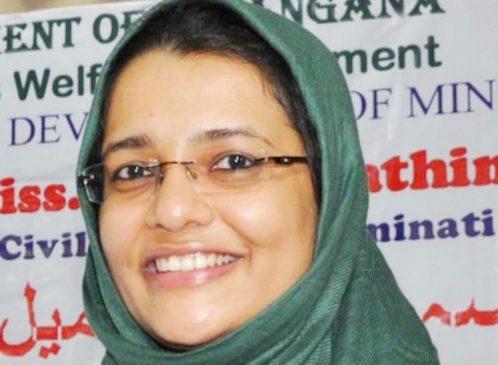 I belonged to an orthodox Muslim community!

The atmosphere around Zeba was not such where an unmarried girl of 24-25 years of age could sit at home and study. But Zeba and her family never cared about others and kept their eyes on the target.

In the environment from which Jamil Fatima Zeba of Hyderabad comes, there is no trend of teaching or writing more to girls. Girls are married here at an early age and there is no word of education in their dictionary . In such an environment, Zeba not only made up her mind to do something in the field of education but also put her time to pass such an examination, in which good people are not able to succeed. Zeba’s decision caused a panic in her family. Everyone felt how this girl was taking a decision. At the age in which she should be married, at that age she wants to achieve a new goal by making it. Well Zeba and her parents did not care about these things, they always stood by their daughter in this decision.

IAS was not a childhood dream

Zeba does not come from those candidates who plan to go to civil services as a child. Yes, Zeba always wanted a stable, responsive and a job that could give her happiness and satisfaction. She wanted to do something for the society and she wanted to answer such people who had heard so many taunts about their studies. When Zeba of Hyderabad, Manikonda, finished her college, she decided that the kind of job she was looking for was only one of the civil services. After completing her MBA from St. Francis College, Zeba made up her mind to prepare for UPSC. For this, she joined coaching and started preparing.

The journey was not easy !

Zeba knew that this journey of UPSC would not be easy and she had prepared herself for this. But sometimes more struggle is waiting for you than you think. The same happened with Zeba. Even though she was working day and night, she was not selected. In the same way, it has been two years of trying and giving exams, yet there was no selection. In the meantime, the tensions of those around and the rest of the family also started growing, for whom a 24-25 year old unmarried girl was sitting in the house trying to achieve a situation that seemed impossible. Well Zeba says in an interview that when I was frustrated during my preparation days, I had read these lines somewhere, which I remembered, the floor is found only by those who have dreams in their lives, nothing is done with feathers , There is a flight of spirits. These lines used to give her courage and she used to get ready without any care for the world. It is the matter of parents who are the biggest support of anyone, then they also always stood with their daughter, especially Zeba gives more credit to her father for this success. Zeba passed this test at the age of 25 with 62nd rank in the year 2018.

Trust in yourself is most important

Zeba says when others are constantly saying that this will not happen, in such a situation, what your mind is saying is very important. Whenever you say anything, you should believe in your dreams, on yourself. Success is achieved only when there is unwavering trust in yourself. There are many such moments during the preparation when the candidate feels that she has taken a wrong decision, am I doing it right? Zeba says that having such thoughts or feeling low is absolutely normal but not getting out of such mood is not normal at all. Do not bother with such thoughts, but try to get out of them. There is nothing in the world that cannot be found through hard work and ascendancy. She says my journey has enhanced me. The Zeba that was in the first year of UPSC has changed a lot today. She has learned a lot in these years which is positive in every aspect. This means to say that if you are taking time to get success then do not panic, these years you are spending on preparation, these are being spent only for your betterment. This will make you more mature as a person.

International Seminar on Fragrances and Flavours organized by the Departments of Chemistry and Botany of Hindu College, University of Delhi

New Delhi: The Departments of Chemistry and Botany of Hindu College, University of Delhi organized an International Seminar on Fragrances and Flavours in collaboration...
Read more
Delhi

Fathers Day 2020: When, where and how did Father’s Day begin?