Terry Fox was born on July 28, 1958, in Winnipeg, Manitoba. He has a brother, Fred and a younger brother Darrell, and a younger sister, Judith. Fox had raised $1.7 million (equivalent to $5 million in 2018) by the time he was forced to abandon the Marathon. 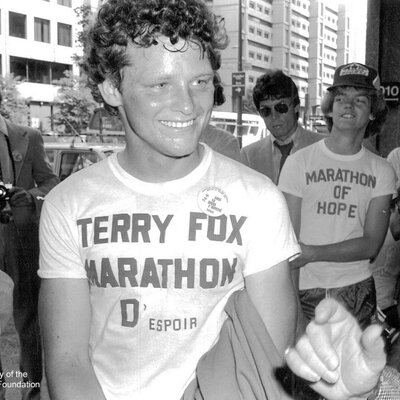 Fox soon learned to run using an artificial leg, and by 1979 he was able to complete a marathon (26.2 miles [42 km]). A few months later he decided to run across Canada in order to raise money for cancer research. Supporters and well-wishers from around the world inundated Fox with letters and tokens of support.

Terry Fox enrolled at Simon Fraser University, where he studied kinesiology as a stepping stone to becoming a physical education teacher.

Fox’s story was shown in the film The Terry Fox Story. The film starred amputee actor Eric Fryer and Robert Duvall, and the movie was nominated for eight Genie Awards and won five, including Best Picture and Best Actor. Another movie, Terry, focused on the Marathon of Hope.

Fox received multiple chemotherapy treatments, but the disease continued to spread. As his condition worsened, Canadians hoped for a miracle and Pope John Paul II sent a telegram saying that he was praying for Fox.