Home Top Stories The tenth round of negotiations ended with progress, next meeting to be...
Top Stories 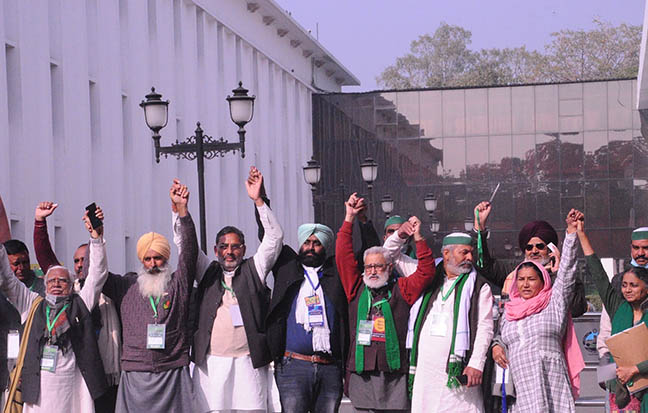 NEW DELHI | Taking steps to remove the deadlock between the government and the farmers on the new agricultural law, the government has proposed a moratorium on the implementation of the law for a year and a half. After the 10th round of talks with the farmer’s representatives holding the path of the movement, Union Agriculture and Farmers Welfare Minister Narendra Singh Tomar said that the farmer’s unions should be stopped for one or one and a half years in the implementation of the new law and in the meantime the government and farmers representatives It is proposed to resolve the issue by forming a committee.

Apart from Agriculture Minister Tomar, Consumer Affairs, Food and Public Distribution Minister Piyush Goyal and Minister of State for Commerce and Industry Som Prakash were also present in the meeting with farmer representatives.

At the beginning of the meeting, Union Minister Tomar congratulated everyone on the 354th Prakash Parv of the tenth Sikh Guru Govind Singh Ji. He thanked the peasant organizations for maintaining discipline during the agitation and again urged them to end the agitation. It has been said by the government that till now there has not been a positive discussion on all the three laws related to agricultural reform and all the aspects of MSP. The government also said that we should look at the farmer movement sensitively and make concerted efforts to end it in terms of inclusiveness in the interests of farmers and the country.

Tomar said, “If organizations have reservations about these laws or you want to make some suggestions, we are always ready to discuss those points with you. The Agriculture Minister urged again that apart from repealing the laws These provisions can be resolved by a point-by-point discussion. Due to the lack of discussion on other options in the previous meetings, no meaningful result was achieved, we urge to make the discussion meaningful. Efforts are on with an open mind to discuss with the farmer representatives. The government is fully committed to upgrading the agriculture sector and enriching the farmers. “

Eliminating the land grab of the farmers, Tomar stated clearly that “no one has the power to hold the land of the farmers in the country under these laws. We want to pursue farming and make the farmers prosperous.” Committed. These laws will bring revolutionary changes in the lives of farmers, which will change the direction of the farmers and improve their standard of living. “

On the auspicious occasion of Prakash Parv of Shri Guru Gobind Singh ji, keeping in view the end of the peasant movement going on in the bitter winter, it was proposed by the government that the implementation of agrarian reform laws be postponed from one to one and a half years. Can. During this time, the representatives of the farmers’ organization and the government can discuss the issues of the peasant movement in detail and arrive at an appropriate solution.

On this, the representatives of the farmer’s unions said that “He will discuss the government’s proposal in detail on January 21 and will convey it to the government in a meeting to be held at Vigyan Bhavan on January 22 at 12 noon. Today’s talks concluded in a cordial atmosphere. Hui.”