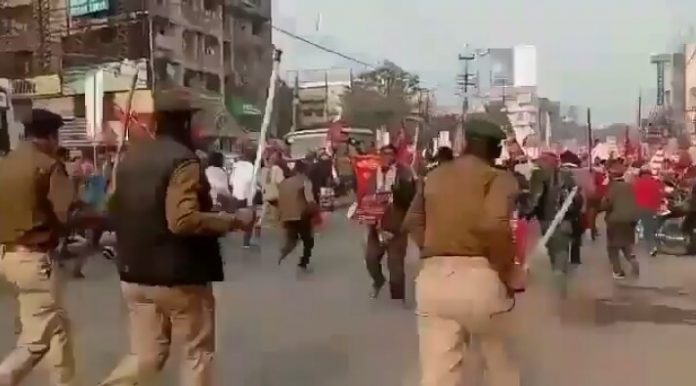 PATNA| Farmers took out a ‘Raj Bhavan March’ in Patna under the banner of the All India Kisan Sangharsh Coordination Committee in Patna in support of a month-long farmers’ agitation on the Delhi borders against three agricultural laws made by the central government. During this time, there was a clash between the protesting farmers and the police and the police fiercely nailed the sticks. As per the predetermined schedule, leaders and activists of several organizations attended the event under the banner of All India Kisan Sangharsh Coordination Committee. A large number of people were holding flags, banners, posters in this demonstration and shouting slogans against the central government.

The police administration tried to stop this march evacuated from Gandhi Maidan at many places, but they did not stop and reached the post bungalow intersection. Police was already deployed here by barricading. Here too, the protesters were trying to move forward by breaking barricades. After the police stopped, the protesters sat there, disrupting the traffic. Later, police lathi-charged to disperse the protesters.

Leaders and activists of the Left parties also participated in this march.

Ramadhar Singh, Bihar state secretary of the All India Kisan Mahasabha, said that the government wanted to end the protests. It is an injustice to the farmers not to let the Raj Bhavan march. He said, “We want to go to Raj Bhavan and submit a memorandum to the Governor.”

Rajaram Singh, in-charge of the All India Kisan Sangharsh Coordination Committee, Bihar, Jharkhand and General Secretary of All India Kisan Mahasabha condemned the lathi charge and warned that Nitish Kumar should desist from suppression of peasant movements.

He claimed that thousands of farmers from far-flung areas of Bihar wanted to submit their memorandum to the Governor of Bihar for their legitimate demands, but instead of adopting a sensitive attitude, the administration took the path of repression.

Apart from Rajaram Singh, this march was led by Ashok Prasad, Lalan Chaudhary, Ramadhar Singh, State President Visheshwar Prasad Yadav. During March, slogans like ‘Cancel all three black agricultural laws’, ‘Take back the power amendment bill 2020’, ‘Guarantee the purchase of all crops including paddy at the minimum support price’, ‘Restore the mandi system in Bihar’ etc..

BJP will make Puducherry the ‘jewel’ of India: Amit Shah