Home Business CAIT SOUGHT SUPPORT OF CHIEF MINISTERS OF ALL STATES FOR ITS BOYCOTT...
BusinessNationalDelhi 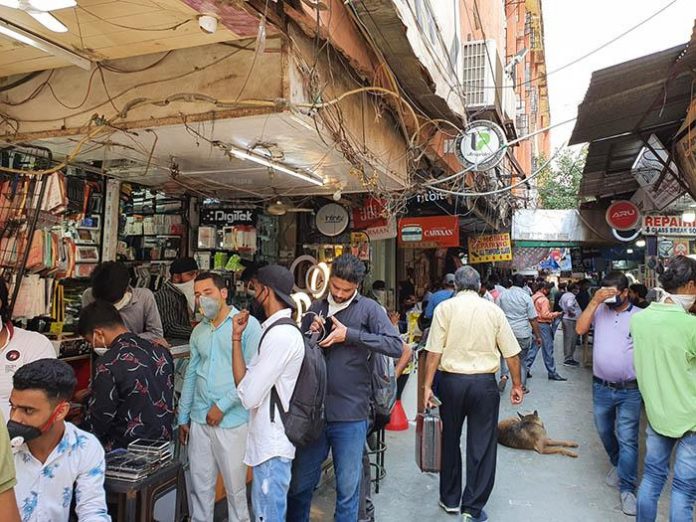 New Delhi :After calling celebrities to support its boycott chinese goods campaign under its nationwide ongoing campaign ” Bhartiya Saamaan-Hamara Abhiman”, the Confederation of All India Traders (CAIT) today in a communication sent to Chief Ministers of all States urged them to lead the campaign to boycott chinese products by issuing support appeal. “At a time when the entire nation is boiled against China for its barbaric  act against Indian soldiers , it is expected that the campaign should be widely supported by one & all and prompted by such intention, the CAIT urge you to support boycott chinese goods campaign,”  said CAIT in its communication to Chief Ministers of all States.

Meanwhile, the CAIT has urged Union Commerce Minister Shri Piyush Goyal to amend the rules and make it mandatory for every e-commerce portal to invariably write Country of Origin with each product sold at their platforms. Most of the e-commerce portals are selling chinese goods for which the consumer remains unaware.

It is to be noted that the CAIT has earlier asked Film Stars & Cricket Stars to stop endorsing Chinese Brands and the first one to respond to CAIT appeal is Cricket Star Harbhajan Singh who has declared not to endorse any Chinese brand. The appeal of CAIT is getting widespread support from all corners of the Country.

CAIT National President Mr. B.C.Bhartia & Secretary General Mr. Praveen Khandelwal in a joint statement issued today has also asked the Union Government to cancel all Government contracts awarded to Chinese Companies whereas on the other hand it has also appealed the Chief Ministers of all States to cancel similar contracts, if it has happened in their respective States. Notably, a couple of days back, the CAIT has asked Maharashtra Chief Minister Shri Udhav Thackery to cancel its recent MOUs with 3 Chinese Companies.

Both Mr. Bhartia & Mr. Khandelwal said that now the time has come when sinister designs of China to control and capture the Indian market should be foiled. There is growing resentment & anguish across Country against China and the sentiments of the Indian people should be respected by political fraternity & other Institutions to join hands with the people of the Country to boycott chinese goods in order to reduce India’s dependency on China. ” It will not happen overnight and a comprehensive strategy is required in consultation with all Chief Ministers, representative of business community, small Industries & Industry sectors”-added Mr. Bhartia & Mr. Khandelwal.

Mr. Bhartia & Mr. Khandelwal said that for this purpose the CAIT has drawn a strategy to boycott Chinese goods in phases and accordingly in the first phase it has identified a broad category of 450 items having more than 3000 items which should be boycotted in the first phase. These are all finished goods whose alternatives are already available in the Country. Mobiles, electronic items, technology driven products, raw material and spare parts have not been included in this list. However, the CAIT will initiate dialogue with the Government to draw a strategy to facilitate manufacturing of these products in India. The ongoing campaign of CAIT will continue till 31st December,2021 and it has set a target of reducing imports from China to the tune of Rs. One lakh crore (13bn dollars) till such time.

F lipkart group on Thursday announced the launch of Flipkart Wholesale, a new digital marketplace and the acquisition of 100 per cent interest in...
Read more