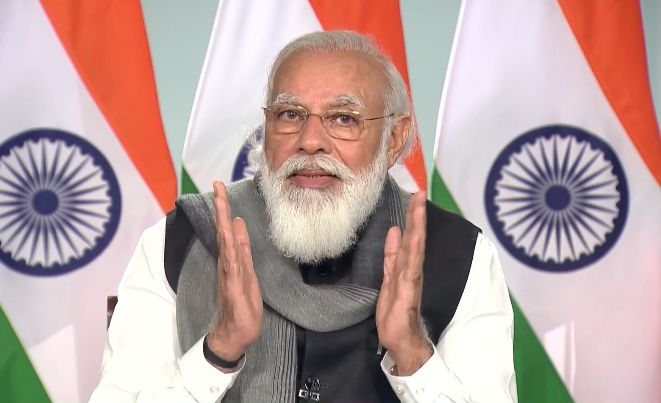 NEW DELHI| Prime Minister Narendra Modi on Thursday while addressing the centenary celebrations of Visva-Bharati University in Santiniketan in Birbhum district of Bengal, described the vision of Gurudev Rabindranath Tagore for Vishwa Bharati as the essence of self-reliant India. He said that the 100-year journey of Visva-Bharati is very special. Vishwabharati is a true incarnation of Gurudev (Rabindranath Tagore) ‘s contemplation, philosophy and hard work for Mother Bharati. This is a kind of adorable place for India, which gives continuous energy to the country to embody the dream that Gurudev had dreamed. Prime Minister Modi said, our country is spreading the message emanating from Visva Bharati to the whole world. India today is leading the world in environmental protection through the International Solar Alliance. India today is the only major country that is on the right track to achieve the Paris Accord’s environmental goals.

The Prime Minister said, when we talk about the freedom struggle, then the idea of ​​19-20 century comes directly into our minds. But it is also a fact that the foundation of these movements was laid long ago. The independence movement of India got energy from many movements that had been going on for centuries. The Bhakti movement strengthened the spiritual and cultural unity of India. In the Bhakti era, our saints, Mahants, Acharyas tried to keep the nation’s consciousness awake in every region, every region, east-west-north-south, every direction in India.

Prime Minister Modi said that the stream of thinking of India from Vedas to Vivekananda was also vocal in Gurudev’s thinking of nationalism. And this stream was not an introvert. She was not going to keep India separate from other countries of the world. His vision was that the world should benefit from what is best in India and that what is good in the world, India should also learn from it.

Fake video of a ‘Sanskrit letter’ engraved inside a copper vessel, which is claimed to have been excavated from the Ram Janmabhoomi site in...
Read more

I am alone, and feel the charm of existence in this spot, which was created for the bliss of souls like...
Read more