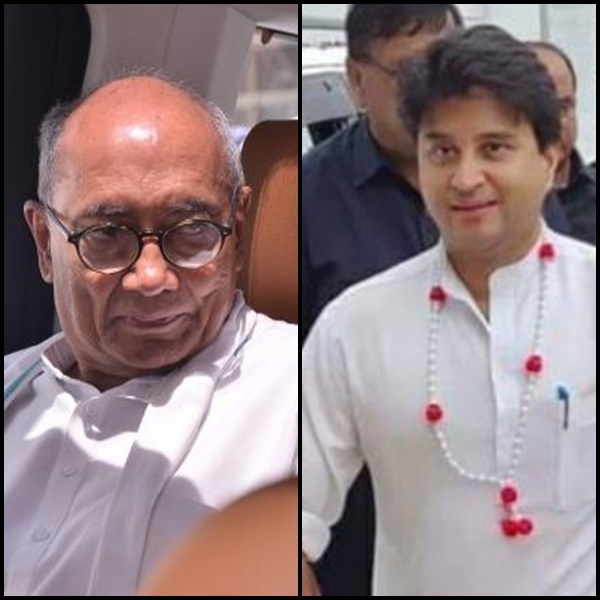 New Delhi | In Rajya Sabha on Thursday, there was a round of Maharaja vs Raja war-counterattack. Former Maharaja of Gwalior and now BJP MP Jyotiraditya Scindia and former Raja of Raghogarh Congress MP Digvijay Singh attacked each other with words. While discussing the motion of thanks on the President’s address to the Upper House, Scindia first criticized the Congress for attacking the government without any reason, favoring the BJP.

Scindia welcomed Prime Minister Modi and said that due to his efficient leadership, the name and fame of the country is increasing. Attacking the opposition parties, he said, “If you want to listen, you should make a habit of listening to others as well. Nevertheless, when the budget session of Parliament starts, the opposition parties boycott the President’s address.”

Rejecting Scindia, Congress MP Digvijay Singh slammed the Prime Minister. He alleged that the Prime Minister was against the federal structure, so he enforced the lockout without any prior notice, without consulting the Chief Ministers of the states.

But he started his conversation with congratulating Scindia. He said, “I want to congratulate the honorable Scindia ji. He has put forth the BJP’s side today as brilliantly as he used to hold the views of the Congress in the past. Congratulations Scindia ji. Wow, Maharaj!

Singh further said, “This House is a House of States and I think the Prime Minister is against the federal structure, because he did not consult the Chief Ministers and put a lockout. Countries like Singapore also gave notice eight days ago.”

Digvijay Singh, a two-time chief minister of Madhya Pradesh, attacked Scindia for joining the BJP. He said, “They should answer why MP’s government was toppled, ignoring the threat of Kovid?”

He said that the government is now ignoring the farmers ‘opposition and questioned that Rajnath Singh, who was the first to respond to the farmers’ movement at the forefront, was not put on the panel interacting with the farmers, but Piyush Goyal, who has nothing to do Was, had meetings with the farmers.

Singh said, “Protest is a fundamental element of democracy and cases are being filed on dissidents in various cases and even bail has been refused.”

Facebook
Twitter
Pinterest
WhatsApp
Previous articleCenter is taking away our rights and giving them to the Lieutenant Governor: Delhi government
Next articleRare and Complex Liver Transplant by Indian Surgeons, 9-month-old baby gets a New Life
Team Janmat Samachar