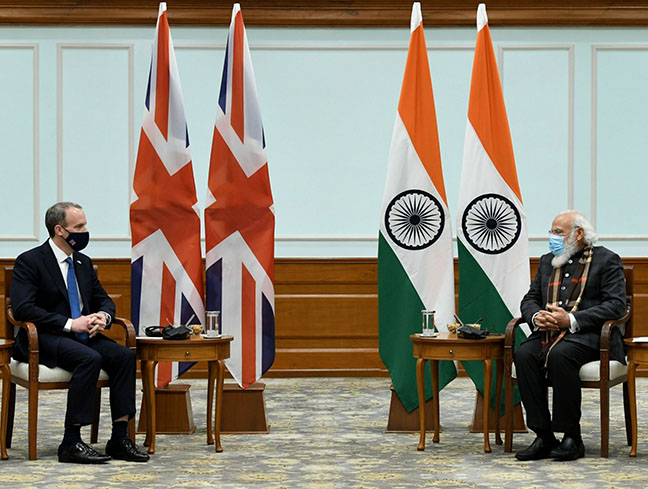 NEW DELHI| Prime Minister Narendra Modi on Wednesday accepted the invitation from the British Prime Minister Boris Johnson to participate in the upcoming G7 summit. The G7 is to be chaired by Britain in 2021 next year, with an emphasis on building a broad coalition against China’s growing power. Britain’s Foreign Minister Dominic Raab submitted a letter on behalf of Johnson, in which Prime Minister Modi has been invited to the G-7 meeting.

Modi thanked Raab and accepted the invitation. The Prime Minister’s Office (PMO) confirmed this in a statement on Wednesday.

British Foreign Minister Raab met Prime Minister Narendra Modi on Wednesday, in which the two leaders discussed various aspects and possibilities and strategic alliances of Indo-UK relations in the world ranging from the Kovid crisis and the Brexit issue. After the meeting, Modi said in his tweet that he is looking forward to the visit of British Prime Minister Boris Johnson to India as the chief guest of Republic Day next month. “I had a wonderful meeting with Britain’s Foreign Minister Dominic Raab,” he said.

According to the Prime Minister’s Office statement, Prime Minister Narendra Modi during the meeting recalled the recent telephonic discussion with British Prime Minister Boris Johnson underlined the importance of the India-UK alliance in the post-Kovid world.

According to the statement, the Prime Minister called for a 360-degree outcome-oriented blueprint covering the areas of trade, investment, defense, security, traffic, education, energy, climate change, health, to harness the full potential of bilateral relations. It said that British Foreign Minister Dominic Raab emphasized that the British Government attaches great importance to its relations with India, which are based on shared values ​​and interests.

Modi also expressed keenness on Johnson’s arrival in New Delhi next month on the occasion of India’s 72nd Republic Day celebrations. After India’s independence, Johnson would be the second British Prime Minister to participate in India’s Republic Day parade in New Delhi after John Major in 1993.

Kovid may cause 2.18 lakh deaths in US till October 10

The heart of Nintendo’s new console isn’t the Switch