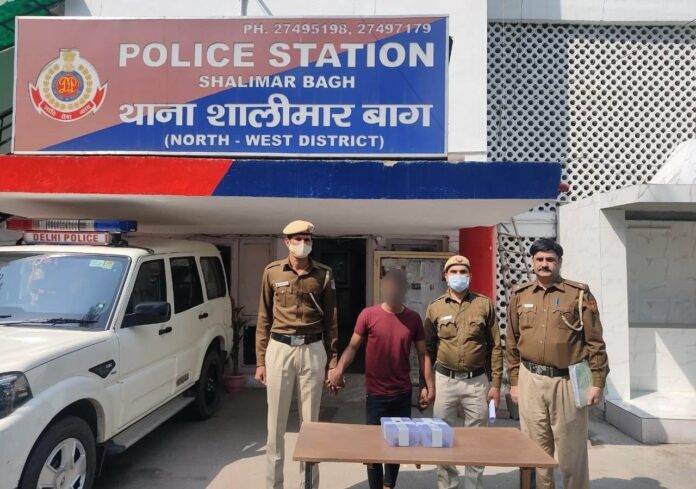 On 24.02.22, a PCR Call regarding robbery of a mobile phone was received at PS Shalimar Bagh. Immediately, victim was admitted in the hospital, who stated that while he was sitting in the park near Caspia Hotel, 3-4 boys came there and assaulted him by hitting on his head & robbed his mobile phone & Rs. 2000/- cash. On his statement, a case vide FIR No. 271/22 U/s 392/34 IPC was registered in PS Shalimar Bagh and investigation was taken up. During investigation, a team led by Insp. Sudhir Sharma, SHO/ PS Shalimar Bagh, comprising of SI Dharambir Singh, HC Rajesh & Ct. Jang bahadur analysed CCTV footages thoroughly and based on the analysis, sources were deployed to gather local intelligence. Based on the inputs and secret information, raid was conducted at Shamshan Ghat, Haiderpur and one person namely, Zakir S/o Md. Chunna R/o Tikona Park, Badli, Delhi (Age-25 years) was nabbed. During his cursory search, one country made pistol alongwith a live cartridge was recovered from his possession. During his interrogation, he disclosed his involvement in the instant robbery case and on his instance, mobile phone of the victim was recovered. He found to be a habitual & active robber, previously found involved in 28 cases of robbery, snatching, theft & arms act. Further efforts are being made to trace his possible involvement in other cases also.

In another case of burglary registered vide FIR No. 179/22 U/s 457/380 IPC PS Shalimar Bagh, cash Rs. 20,000/- and jewellery articles were stolen from a house in Shalimar Bagh, when family members were gone outstation. During course of investigation, owner of the house suspected their tenant namely, Mohit S/o Harish R/o Shalimar Bagh, Delhi (Age-28 years) to be involved in this case. Accordingly his profile was interrogated and it was found that he was recently terminated from his private job in Adarsh Nagar, due to his suspicious activities. Local informers also conveyed that he recently went to a jewellery shop to sell the stolen jewellery. Based on the inputs and information, he was apprehended and on sustained interrogation, he disclosed his involvement in the case. He confessed that he had stolen the cash & jewellery articles from the house as there was nobody present at home during that time. Even after committing burglary, he was living in the same house as tenant so that nobody would doubt over him. He disclosed that he sold the jewellery for a sum of Rs. 2,44,000/-. He further disclosed that out of Rs. 2,44,000/-, he deposited an amount of Rs. 1,75,000/- in his bank account and also purchased a mobile phone for Rs. 40,000/- out of the remaining cash & Rs. 10,000/- recovered from him and he spent rest of the money. He was living in the same house as tenant alongwith his family on a rent of Rs. 6,500/- for the last 6 months. He originally belongs to Sonepat, Haryana and started living in Shalimar Bagh so to do his private job in Adarsh Nagar. Further efforts are being made to freeze his bank accounts and to trace the receiver of case properties.