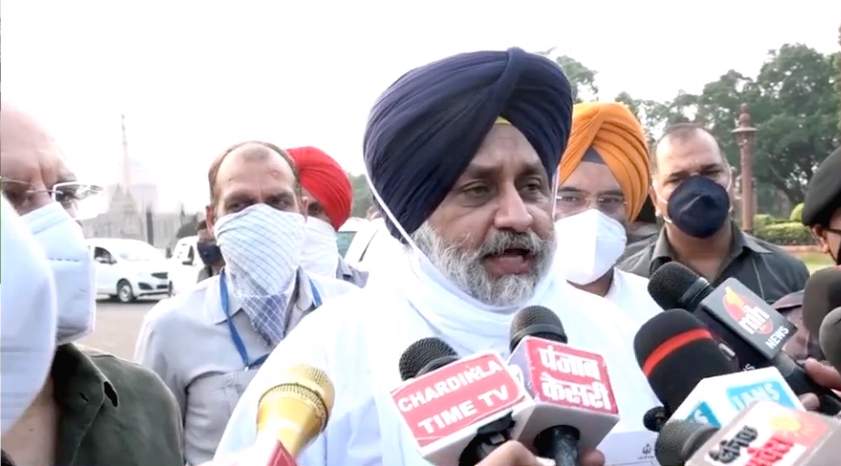 New Delhi/Chandigarh: The Shiromani Akali Dal today“vehemently” urged the President of India, Shri R N Kovind not to grant his  assent to the three farmers bills passed by the Parliamentas these  “endanger the very survival of farmers and other farm related labour and trade.”The farmers came to the country’s  rescuewhen the country needed them. Today, it is the country that must come to their rescue.”

A delegation of the SAD led by the party President Sardar SukhbirSingh Badal called on the President in the Rashtarpati Bhawan this
afternoon and urged him to “ act as the nation’s  conscience keeperand the custodian of the Constitution” and come to the rescue of
farmers, farm and mani labour and farm traders.

Later , speaking to newsmen outside the Rashtarpati Bhawan, Mr Badal said that the’ party has taken the farmers’ cause to the highest level
in the country . The  Core Committee of the party would meet soon to decide the next course of action to take the struggle for justice  to
the next level. “But we will stand by the farmers every inch  of the way forward.  We are a farmers’ party and 95%  of our members are
farmers. “

SAD president  warned that ”ignoring  the sentiments of the farmers can have the potential to  disturb social harmony and peace in the
country .”

He disclosed said that the party has  asked the President to heed the sentiments of   millions and millions of beleaguered farmers, farm
and Mandi labourers , arhtiyas and Dalits  represented here through us here  and to act    on the basis  of these sentiments and  send the
concerned Bills  back to the parliament for reconsideration.

The memorandum  submitted by SAD also asked  the President “to advise the government to send these Bills to a Select Committee of
Parliamentarians which could then take the stake holders on board before presenting these bills to the parliament again.”

The memorandum   told the president , ”An hour comes in the life of a nation when one has to be  “counted on one side of the dividing line
between  exploitation  and the exploited.  Such an hour is upon us now. The Shiromani Akali Dal  will stand unflinchingly with the
downtrodden and the exploited classes at this critical juncture.”

It said that “for  almost a century now, the Shiromani Akali Dal has passionately, effectively and forcefully championed the cause of the
farmers, the farm labour, the Dalits and   other socially and economically downtrodden sections of society.  “The farmers especially
in Punjab have always looked up to us  to raise our voice in defense of their causes.”

The Memorandum reminded the president that “the  SAD has a legacy of struggle and sacrifice in the defense of Panthic values. In this
legacy,  fighting against injustice against the poor and the defenseless is among the highest virtues preached to us by the great
Guru Sahiban, saints and seers. That legacy will be preserved now and in future,” the party told the president giving a clue to its future line of action

The memorandum also highlighted how the ruling party “ used its huge majority  in the Parliament  to bypass  the time-honoured
democratic traditions of taking the Opposition and allies into confidence and building  a national consensus on critical issues.
This has cast a dark shadow on our democratic traditions as it short-circuited the accepted norms, procedures and conventions  of the
parliamentary democracy. It was a sad day for democracy”

The memorandum said that the “issues at stake required  in-depth consideration as the concerned bills for legislation  have  a strong
bearing on the vital and sensitive interests of the stake holders -the farmers, the khet and Mandi mazdoors , the Arhtiyas and the
Dalits. These segments constitute  over 65% of our country’s population. The bills have an implication for even the remaining 35%
as agriculture is the backbone of our entire economy. “

Highlights : It is the patriarchy who first talked about color and then caste on the basis of qualities.it is believed that the...
Read more
Economy

we are able to create beautifull and amazing things