Trump engaged in projecting ‘Shantidoot’ image in view of elections 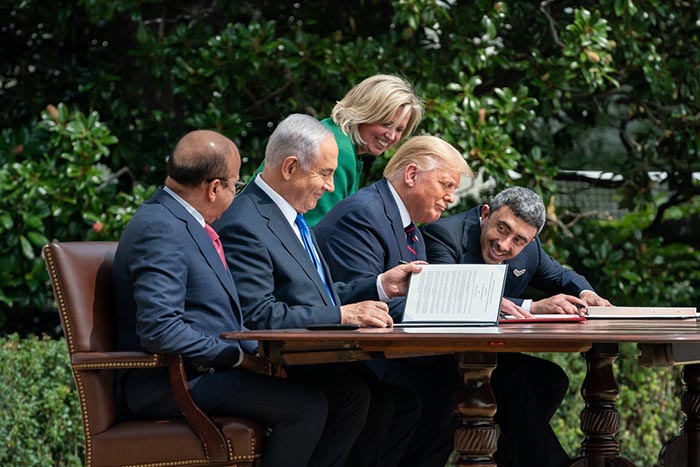 NEW YORK | As the date of the presidential election draws closer in the US, US President Donald Trump has begun to portray himself as a ‘peacekeeper’.

He signed agreements between Israel and two Arab countries, the United Arab Emirates and Bahrain, to establish diplomatic relations, saying on Tuesday that this was a change in the ‘course of history’.

While the Taliban and representatives of the US-backed Afghan government are negotiating for peace in Doha, Qatar’s capital, Trump hopes it will end the conflict in Afghanistan.

The Taliban deal will allow them to declare that after 19 years the US will be able to withdraw their forces from Afghanistan under their leadership and it will fulfill their promise made before the 2016 election.

Trump has targeted his Democratic Party rival Joseph Biden for his disastrous invasion of Iraq and many other foreign conflicts, entanglements in his 40-year (Biden) political career, and is about himself a peacekeeper and Claimed to be a leader who brings soldiers home instead of sending them to more countries for deployment.

The US military has announced that it will withdraw several thousand soldiers from Afghanistan and Iraq before November, leaving only a handful of soldiers there.

Under the Trump administration, Washington’s relations with its closest allies in Europe have weakened slightly. Relations with Europe have been affected by Trump’s decision to criticize European countries for cost overruns, increasing their share of defense spending and withdrawing US troops from Germany.

His foreign policy was criticized by Democrat leaders as well as some Republican leaders.

Trump also held meetings with the country’s supreme leader Kim Jong Un to curb North Korea’s nuclear and missile programs, which caught the attention of the whole world, but to no avail.

China showed its aggressive form in Asia and Trump could not do anything, it is the Middle East and Afghanistan, where he can show results by projecting himself as a peacekeeper before elections.

It could also force the Palestinians to resume talks with Israel.

UN Secretary-General Antonio Guterres spokesman Stephen Dujarric said on Tuesday, “I think it is very clear that they expect these agreements to have a renewed dialogue between the Palestinians and the Israelis. They also hope that in the Gulf This will be a new opportunity for regional stability to develop. “

GHAZIPUR BORDER | Farmers who are protesting against agricultural laws are now facing rain. The rain on Sunday morning has increased the problems of the farmers. The tents...
Read more