Home Corona WHO statement on Coronavirus: gave the example of Dharavi of Mumbai
Corona

WHO Dharavi: WHO chief Tedros Adhanom Ghebreyesus said on Friday that it is still possible that coronavirus can be brought under control.

The World Health Organization said on Friday that it is still possible that coronavirus can be brought under control. Despite the doubling of corona cases in the last 6 weeks, it can be controlled. WHO chief Tedros Adhanom Ghebreyesus said that the biggest slums in Italy, Spain, South Korea, and India showed how dangerous the virus was but could be controlled with stern action.

In a press conference in Geneva, the WHO chief said that Corona cases have more than doubled in the last 6 weeks. There are many examples in which it was seen that even though the virus has spread rapidly, it can still be controlled. These examples are – Dharavi in Italy, Spain, South Korea, and India. Dharavi of Mumbai is a very populous area. There it was successful in breaking the chain of coronavirus on the basis of testing, tracing, isolation, and treatment. 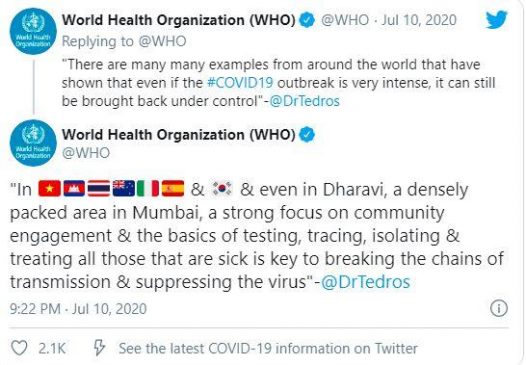 It is worth noting that in more than 180 countries around the world, including India, the fear of Coronavirus is being seen. So far, more than 1.22 crore people have fallen prey to this infection. COVID-19 has taken the lives of more than 5.5 lakh patients. In India too, cases of corona are increasing almost every day. According to the data released by the Ministry of Health the previous day, the number of Corona infected in the country has increased to 7,93,802. In the last 24 hours (from 8 am Thursday to 8 am Friday), 26,506 new cases of corona have been reported. This is the largest number of corona patients exposed in a day.

Not only this, but 475 infected people have also died during this period. This is also the highest number of deaths from corona in a single day in the country. So far 4,95,513 patients have been cured in the country and 21,604 people have died. Talking about the recovery rate, it has reached 62.42 percent after a slight increase. Corona patients are coming from all the states of the country. There are also many states, which were freed from this epidemic, but due to the entry of migrants in the state, they again fell into this infection.

Washington | US President Joe Biden has announced sweeping new vaccine requirements, as part of a new action plan to stem the rise in cases of...
Read more
Corona

New Delhi| With only 66 new Covid cases and two deaths on Sunday, Delhi is set to open up completely from Monday. While theaters and multiplexes...
Read more
Corona

A simple girl is best with good attitude